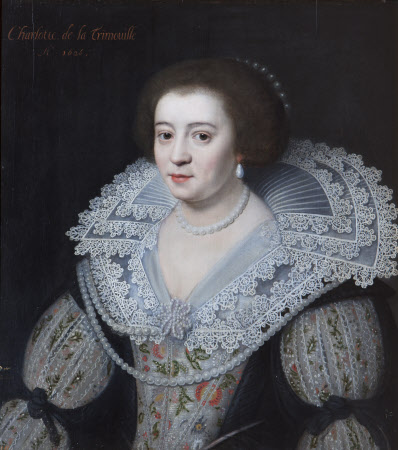 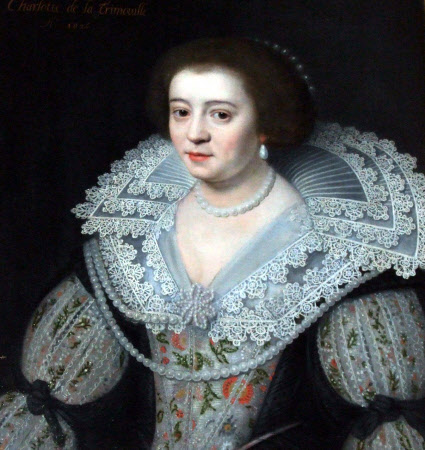 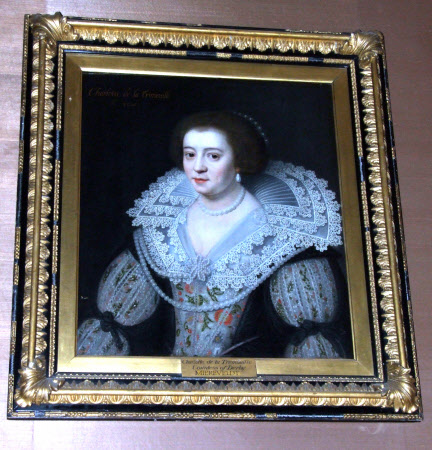 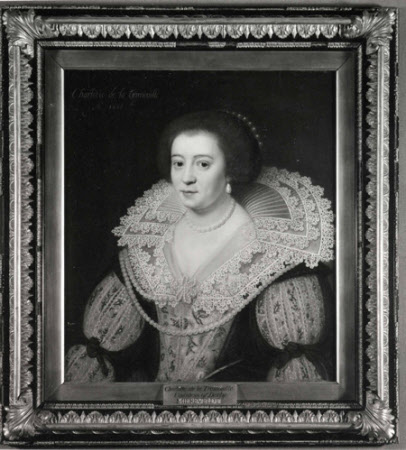 The sitter was the daughter of Claude de la Tremoïlle, Duke of Thouars, and Charlotte, daughter of William the Silent. Her mother came to England in 1625 with Henrietta Maria, Queen Consort of Charles I. She married James (Stanley), Lord Strange, later 7th Earl of Derby (1607-1651), at the Hague in 1629. She bore him the impressive sum of nine children. She was not only supremely fertile, but also intrepid; she organised the defence of Lathom House when it was besieged by the Parliamentarians in 1644. She later played the same role in the Isle of Man in 1651, after her husband’s execution. The celebrated portrait of her, with her husband and daughter, by Van Dyck, is in the Frick Collection, New York.

Oil painting on panel, Charlotte de la Trémoïlle, Countess of Derby (1599-1664), attributed to Michiel Jansz. van Miereveldt (Delft 1567 – Delft 1641), 1626. Inscribed in orange top left 'Charlotte de la Tremoille Ao 1626'. Scratched 5-pointed star at lower right. Inscribed in orange lower left '110'. Painted at The Hague. At lower left inscribed 'D:110' in white, then crossed out, and repeated in orange below. A half length portrait, of the bride of James Stanley, Lord Strange, the future 7th Earl of Derby, half turned to left, gazing at the spectator, wearing a low-necked dress with fine embroidery with pearls with dark over-dress and ties on sleeves. White lace collar - three pleated layers, muslin-edged with bobbin lace, and similar lace down to bust. Sleeves embroidered with white and coloured flowers. Wearing two ropes of pearls around shoulders, one caught with pearl brooch, also pearl earrings, and pearl hair ornament. Companion to NT 355478.

Painted in the Hague in 1626; Lothian collection; bequeathed with the hall and contents by Philip,11th Marquess of Lothian (1882-1940)