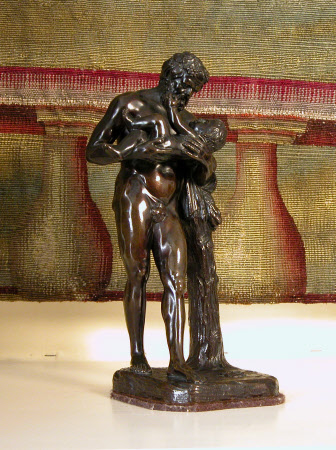 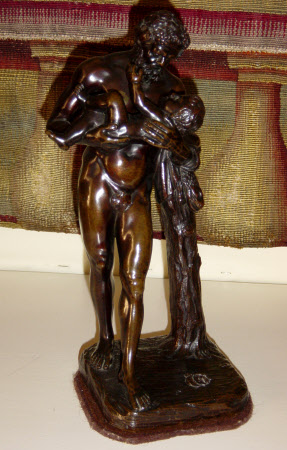 Bronze sculpture, Silenus holding the Infant Bacchus by Francesco Righetti (Rome 1749 – Rome 1819). Male figure leaning on tree trunk, carrying child in his arms. Sculptor's mark on back of plinth. Companion to NT 355065 (BLI/M/6). The original Roman copy after early Hellenistic was found in Rome in the 16th century in the Gardens of Sallust near the Quirinal. Its ownership changed a number of times between 1569 when it is first recorded, and in 1807 Napoleon acquired it for France. A bronze copy of the Imperial Roman marble statue (Louvre, Paris), discovered in Rome in 1569, and purchased in 1807 by Napoleon from the Villa Borghese, Rome. The Roman marble is probably a copy of a lost Greek bronze original of the late 4th century BC by Lysippus or one of his followers.