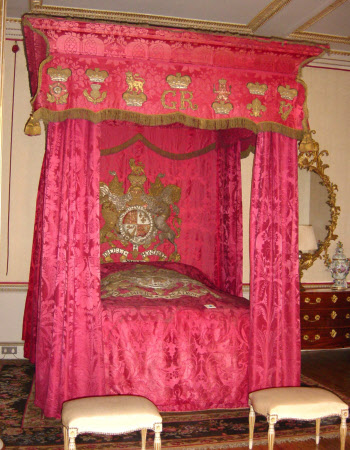 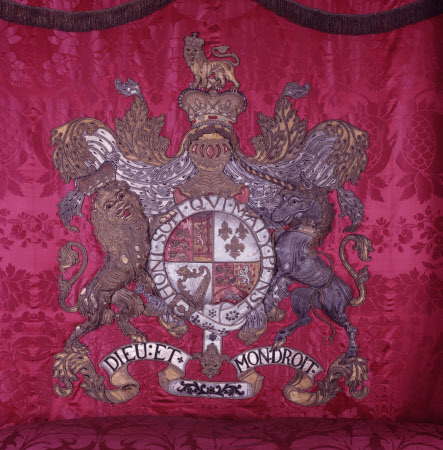 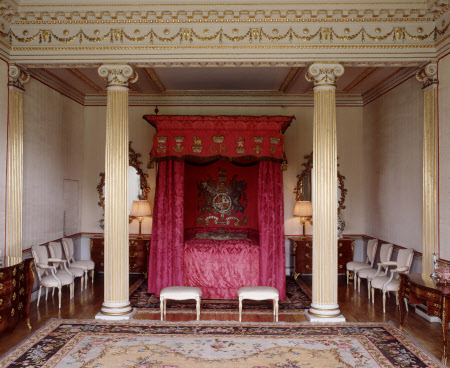 A mahogany framed and embroidered silk hung State Bed, by William Vile and John Cobb, London, circa 1765-1775 With the canopy of state embroidered with the English Rose, The Scottish Thistle, The Lion and the Unicorn, the Feather of the Prince of Wales, the Harp for Ireland and centered by the crown over GR for George II. The back hanging and bed carpet bearing the cyphers of George II and Queen Anne. With a pair of front turned mahogany bed posts carved with stylized leaf and flower decoration with trailing vines and reeding to the upper part of the columns and with fluted collars above.

The state bed was constructed after 1765, by William Vile and John Cobb and covered in two different types of damask, and bearing the ciphers and/or arms of both Queen Anne (1702 – 1714) and those borne by George I, George II and George III (until 1800), Blickling’s State Bed is an assemblage of fabric and timber elements of various periods. The tester and headboard (which bear the Royal Arms as used 1714 – 1800) are said to have been made out of a canopy of state given to John Hobart, 2nd Earl of Buckinghamshire in 1762 on the occasion of his embassy to St. Petersburg whilst serving as envoy to the Russian Court, a post he held between 1762 and 1765. Throughout the eighteenth century, every British ambassador representing the monarch abroad was supplied by the government with a state canopy, a chair of state, a pair of portraits of the king and queen as well as an allowance for ambassadorial silver. The Blickling canopy was made by William Vile and John Cobb (see National Archives, Kew, PRO LC 9/307). Following his return to England in 1765, and intent upon making improvements to Blickling, it seems that the 2nd Earl used the canopy to make a new state bed, incorporating it into the tester and headboard, but using different – possibly earlier – fabric and fragments to make up the rest of it. The bed was recorded as being in the State Bedroom in the inventory of Blickling taken in 1793. Another example of a state canopy from George III’s reign converted into a bed exists at Knole (see Rowell and Burchard 2016a, p. 45). (James Weedon 2016)

Part of the Lothian Collection. The hall and contents were bequeathed to the National Trust in 1940 by Philip, 11th Marquess of Lothian (1882-1940). The bed constructed by William Vile and John Cobb for the 2nd Earl of Buckinghamshire circa 1770.

Rowell and Burchard 2016a: Christopher Rowell and Wolf Burchard, 'From Knole to Paris: The third Duke of Dorset and the first Earl Whitworth as diplomatic Patrons and Collectors', National Trust Historic Houses & Collections Annual/Apollo (2016): 43-52.