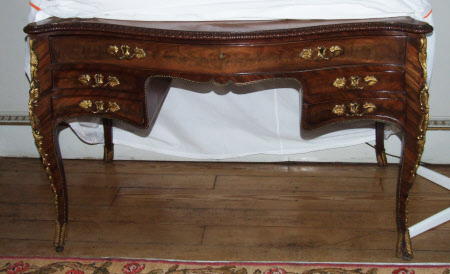 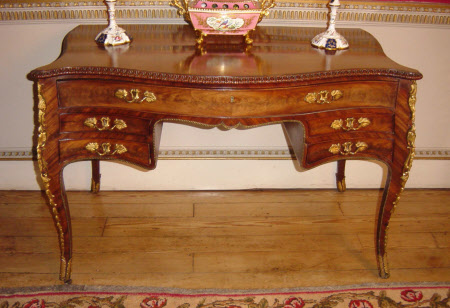 A mahogany and gilt bronze mounted dressing table, attributed to John Cobb (1715-1778), London, circa 1760 With a serpentine shaped top with molded leaf carved edge above a long drawer fitted with an adjustable mirror and various lidded compartments and drawers above four smaller drawers to the kneehole, raised on cabriole legs. The inside and outer edge of the dressing table with applied brass beading and with further applied castings to the legs and a three section applied leaf cast foot. With naturalistic cast handles modeled as vines and leaves and with conforming handles to the sides.

This dressing table and the mahogany commode (NT354321) were items almost certainly supplied by John Cobb, who was paid £86 in 1762 by Lord Buckinghamshire. The pair of commodes in the same room (NT354356) are also almost definitely by Cobb's workshop but may have been supplied at a slightly later date. It is believed that John Cobb (1715 - 1778) was apprenticed in 1729 to Timothy Money (fl 1724–59), a Norwich upholsterer. In 1755 he married Sukey, a daughter of the cabinetmaker Giles Grendey, and is said to have acquired a ‘singularly haughty character’, strutting ‘in full dress of the most superb and costly kind...through his workshops giving orders to his men’. He worked with William Vile from 1750 until 1765 in premises at No. 72 The Corner House of St. Martin's Lane & Long Acre. In the early 1750s, William Hallett, formed a working syndicate with Vile & Cobb. Vile and Cobb supplied furniture to the leading patrons of the day including George III and Queen Charlotte, the 1st Earl of Leicester at Holkham Hall, the 4th Duke of Devonshire at Chatsworth and the 4th Duke of Bedford at Woburn Abbey. Vile and Cobb held a Royal Warrant from 1761 until April 1764 when Vile retired. While Vile created works in an Anglicized Rococo style, Cobb’s furniture of the 1770s was executed in an elegant Neoclassical style. Examples of Cobb's work are in the Royal Collection at Buckingham Palace. Following Vile's retirement in 1764, Cobb carried on in business with the assistance of his foreman, Samuel Reynolds (fl. 1751–85). He made furniture to very high standards and earned a reputation for exquisite marquetry. After Cobb’s death in 1778, Samuel Reynolds operated in partnership with John Graham at Cobb’s address at 72 St Martin’s Lane, London, until 1785. (James Weedon 2016)

Part of the Lothian Collection. The hall and contents were bequeathed to the National Trust in 1940 by Philip, 11th Marquess of Lothian (1882-1940). This dressing table was almost certainly made for the State bedroom.