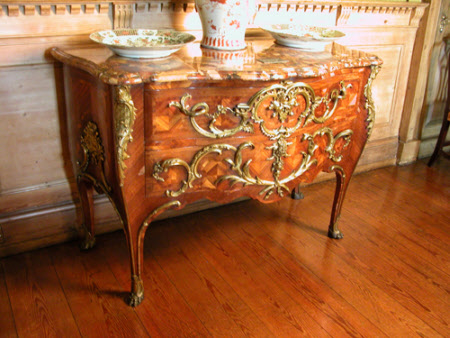 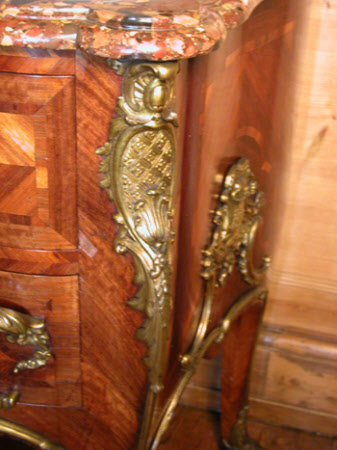 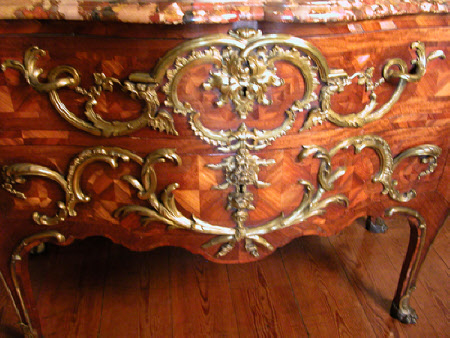 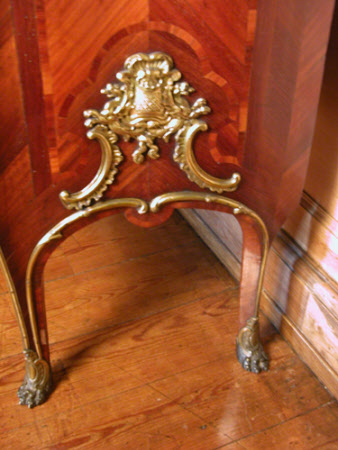 Charles Cressent (1685-1768) came from a family of sculptors and is best known for the impressive sculptural mounts on his pieces. They provide a lively sense of movement on the relatively sobre surfaces of his furniture, which were often, as here, veneered with restrained geometric patterns in bois satiné (a wood related to mahogany), sometimes combined with amaranth (purplewood). In eighteenth-century Paris it was strictly forbidden for members of the guild of cabinet-makers to make their own gilt-bronze mounts. They were supposed to buy them from the guild of casters and guilders. Cressent disregarded this ban, employing metal-workers within his own workshops to execute his own models. He was the subject of complaints from the casters and guilders on several occasions. For a very similar example see V&A collection museum no. 1119:5-1882, which has almost identical mounts and is of an identical size, suggesting it may be the pair to the commode at Blickling. The example at the V&A has had small parts of the ormolu replaced. Cressent's work is regarded as some of the best to come out of Paris during this period. A key artist of the eighteenth century, Cressent played a pivotal role in the birth of the Rococo style in France. See Daniel Alcouffe, Anne Dion-Tenenbaum, Amaury Lefébure, Le mobilier du musée du Louvre, t. 1, Dijon, Editions Faton, pp. 128-129. Alexandre Pradère, Les ébénistes français de Louis XV à la Révolution, Paris, Editions Le chêne, 1989, p. 129. (James Weedon 2016)