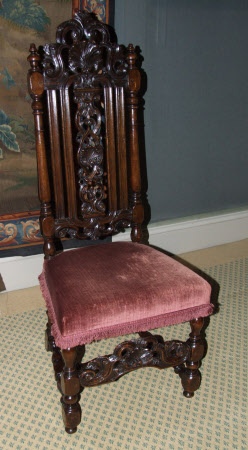 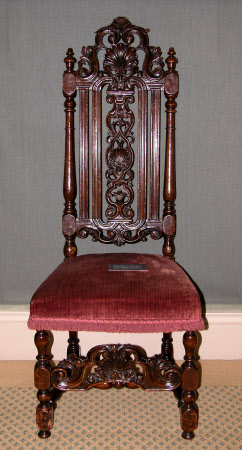 One of a set of six walnut high back chairs, Dutch, reconstructed in the 19th century with some 17th century elements. With an elaborately carved scroll and leaf top rail centered by a shell cartouche and continuing to a conforming pierced central back panel flanked by moulded upright supports and baluster turned supports, the padded seat, upholstered in a red velvet above baluster turned legs tied by stretchers and with a scroll and shell carved pierced front stretcher. Some 17th elements and some 19th century elements. Bearing the trade label of Frank Partridge, London and New York

Bought by Lord Lothian in 1939 from the collection of the Countess of Carnarvon.