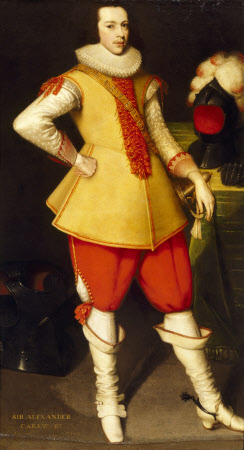 The person represented in this portrait was cut out of the painting’s frame by his Royalist relatives in the English Civil War when he took the side of Parliament. Yet he switched sides and was beheaded, at the age of 35, at Tower Hill on the 23rd December 1644. Having thus become a Royalist hero, his picture was sewn together again and restored to its frame; the crude stitches can be seen to this day. It was accepted in lieu in 2005 on the estate of Sir John Carew Pole, 12th Bt (1902 - 1993) and remains at Antony House in Cornwall.

Oil painting on canvas, Sir Alexander Carew, 2nd Bt (1608–1644), manner of Marcus Geeraerts, the younger (Bruges 1561 - London 1635), circa 1630. Carew was an English Member of Parliament executed for attempting to betray the Parliamentary cause during the English Civil War. He was the eldest son of Sir Richard Carew, 1st Baronet (c.1580-1643). He was elected MP for Cornwall in the Long Parliament in 1640. On the outbreak of the Civil War, Carew declared for Parliament. Although Cornwall and the rest of the south west were generally under Royalist control in the opening stages of the war, the Mayor of the strategically vital port of Plymouth had seized it for Parliament, and Parliament entrusted its defence to a committee including Carew. Carew was made governor of St Nicholas's Island in Plymouth Sound, the keystone to the defence of the town. It was while he held this post that his father died, on 14 March 1643, and he inherited the baronetcy. After the Royal victory at Stratton (16 May 1643) and the capture of Bristol, Sir Alexander secretly contacted the commander of the Royal forces then besieging Exeter, offering to surrender Plymouth in return for a pardon for himself. The Royalists were willing enough but the delay left time for a disloyal servant to leak the plot to the Mayor and the rest of the Committee. He was arrested, and taken by ship to London, committed to the Tower of London on 5 December. He was eventually tried for treason by court-martial, in the Guildhall on 19 November 1644. Convicted, he was sentenced to death and beheaded on Tower Hill on 23 December 1644. Sir Alexander had married Jane Rolle in December 1631, and they had two sons who lived to adulthood. The elder, John, succeeded to the baronetcy on his execution, and although the estates were initially sequestered they were released and he was allowed to inherit in November 1645; he later became a long-serving Member of Parliament after the Restoration. Sir Alexander's half-brother, John, also became an MP, in 1647, and was one of the court that tried the King in 1649: being still alive at the collapse of the Commonwealth, he was hanged, drawn and quartered as a regicide.

Accepted by HM Government in lieu of inheritance tax and allocated to the National Trust for display at Antony, 1989.