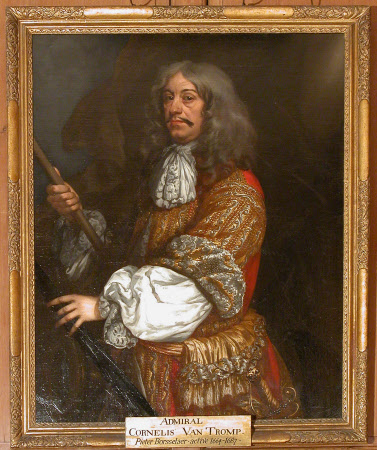 This sumptuous portrait of the Dutch naval officer Admiral Cornelius Tromp (1629 - 1691), holding his naval gun and baton of command, was commissioned from a Dutch artist living in England by Ambrose Elton of the Clevedon Court (NT) family, ‘in memory of theire great Intimacie of acquaintance’. He sat for both Borsselaer in 1675, and Sir Peter Lely, whose portrait of him is in the National Maritime Museum, London, the same year Charles II gave him a baronetcy which this may also be commemorating. It was soon after the third Anglo-Dutch War, where he had distinguished himself at the Battle of Texel, and which was concluded with the Treaty of Westminster in 1674. He was a vain man who reputedly had more portraits of him than any other person in the 17th century but he also had many inns named after him on account of him being a notorious drunk.

Oil painting on canvas, Admiral Cornelius Tromp (1629 - 1691) by Pieter Borsselaer (London 1664 - Middleburg 1687), inscribed: This Admirall Tromp. is drawne at The desire of Ambrose Elton[n?], and lift him for a memmory of theire great Intimacie of acquaintance, who to obleige him, did sitt him selfe. Ao. 1675. Who was with him all/the time it was/doinge. A three-quarter-length portrait, wearing richly embroidered habit, after he had negotiated the treaty ending the third Anglo-Dutch war.

Painted for Sir Arthur Elton in 1675; thereafter not known;on loan from the Trustees of Antony since 1961