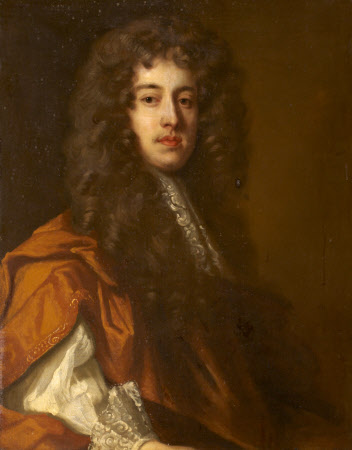 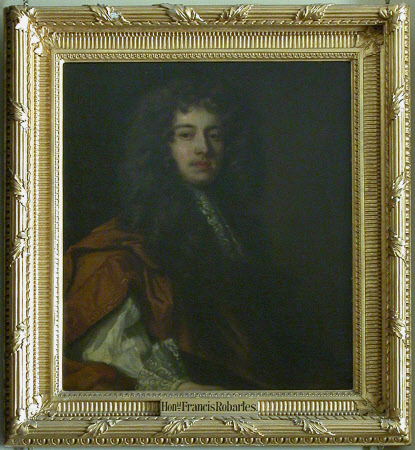 Oil painting on canvas, The Hon. Francis Robartes, MP, FRS (1649/50-1717/18), manner of Sir Peter Lely (Soest 1618 – London 1680). A half-length portrait of the honourable Francis Robartes wearing red robes, lace cravat. He was the son of John Robartes, 2nd Baron Robartes of Truro, 1st Viscount Bodmin, 1st Earl of Radnor by his second marriage to Letitia Isabella Smith, or Smythe. He married firstly, in 1768, Penelope Pole daughter of Sir Courtenay Pole and secondly, in 1686, Lady Anne Fitzgerald, daughter of the 17th Earl of Kildare and widow of Hugh Boscawen of Tregothnan. He was a composer and scholar, the most esteemed English imitator of Lully, 'all the compositions of the town were strained to imitate Baptists [Lully's] vein; and none came so neer it as the honorable and worthy vertuoso Mr. Francis Roberts' (Roger North), a Teller of the Exchequer, Fellow and Vice President of the Royal Society, and was MP for Bossiney, Bodmin, and various other Cornish constituencies, between 1673 and 1718. His eldest son, John, succeeded as 4th Earl of Radnor in 1741. This could be a late-18th-century pastiche, made up as the pendant to his wife's; their frames and lettering are certainly subtly different, as if one or other was an after-thought.

By gift to the sitter's father-in-law, Sir Courtenay Pole, 2nd Bt and thence by inheritance and descent; on loan from the Trustees of Antony