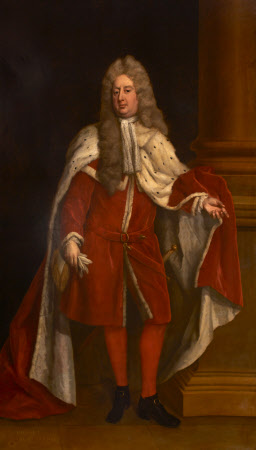 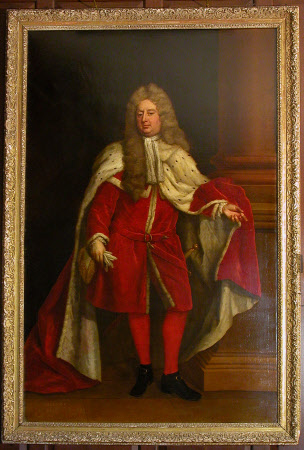 Oil painting on canvas, Gilbert Coventry, 4th Earl of Coventry (c.1668 - 1719) by Michael Dahl (Stockholm 1656/9 – London 1743), signed and dated, mid-right: Michl Dahl pinx:/1714. A full-length portrait of the father-in-law of Sir William Carew, 5th Bt and son of Thomas Coventry, 1st Earl of Coventry and Winifred Edgcumbe. He is wearing crimson velvet and ermine trimmed, peer's robes, no doubt shortly after his succession in 1712. It was this unexpected event that transformed the prospects of Sir William, who was set to marry his only daughter and heir, and made possible the building of the new house at Antony. A list of pictures brought from Croome includes what must be this, and waist-lengths of Lord Keeper Coventry and [Lord-crossed out] Thomas Lord Coventry [inserted] his son, but none of his daughter. He married firstly Dorothy Keyt, daughter of Sir William Keyt, 2nd Bt and Elizabeth Coventry around the 30th November 1694 and their daughter was Lady Anne Coventry, Lady Carew. He married, seconldy Anne Master, daughter of Sir Streynsham Master and Elizabeth Legh, on 27 June 1715 at Guildhall Chapel, London, England. He died on 27 October 1719 at Croome Dabitot, Worcestershire, England, without male issue. His will dated 17 October 1719 was probated on 13 February 1719/20. On his death, the Barony of Coventry of Aylesborough became extinct.

By inheritance and descent from Lady Anne Coventry, Lady Carew; on loan from the Trustees of Antony