Strands of Time I: Medieval Cotehele 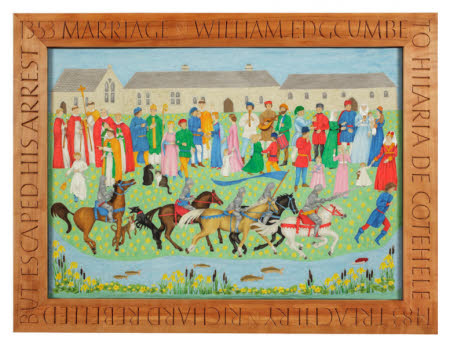 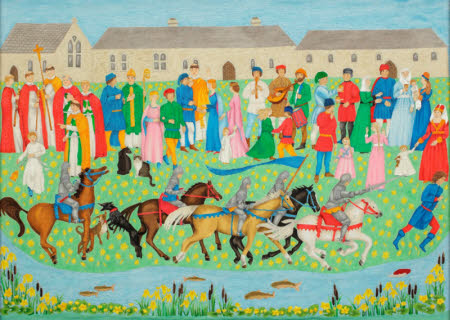 Stories are often more captivating when shown in pictures rather than words. The idea of embroidering a picture to help convey Cotehele’s story was first suggested by a member of staff at Cotehele to Maureen King, a longstanding volunteer and expert embroiderer. Maureen liked the idea, and discussed it with her colleagues from the Tavistock Embroiderer's Guild, four of whom enrolled as National Trust (hereafter NT) volunteers to form the Cotehele Embroidery Group. In addition to Maureen, this group comprises Fran Baigent, Kath Braven, Katy Choroszewska, and Susan Wright. This embroidery, ‘Medieval Cotehele’, is the first in a planned series of four – The Strands of Time – to illustrate Cotehele’s history from the middle ages until ownership transferred to the NT in 1947. Katy was responsible for creating the cartoon (the drawing on which the embroidery is based) which she then copied, in paint, onto a cotton background. Some of the background detail was completed using a sewing machine, such as the daffodils for which Cotehele is famous. When Katy finished the cartoon, Fran, Kath, Maureen, and Susan used their creative needlework skills to embroider the scene. Embroidery is an art that requires a great deal of planning and patience. Fran observed: ‘I think that we’ve spent as much time thinking about how to do it [and practicing their stitches], as we’ve spent actually doing it.’ Planning for ‘Medieval Cotehele’ began in 2006; it was completed in 2013.

Embroidered montage with stylised narrative scenes, showing the marriage of William Edgcumbe and Hilaria de Cotehele (1353); the licencing of Cotehele chapel (1411) and the escape of Richard Edgcumbe from the King's men (1483). Displayed in a custom-made frame 349380. This is the first in a series of four planned embroideries, each representing a different epoch of Cotehele's history.