Leander Taking Leave of his Parents 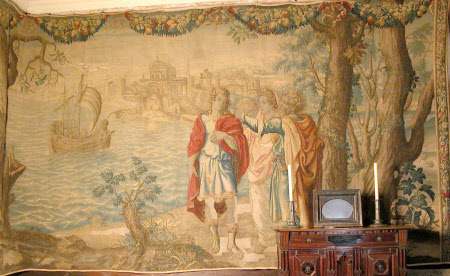 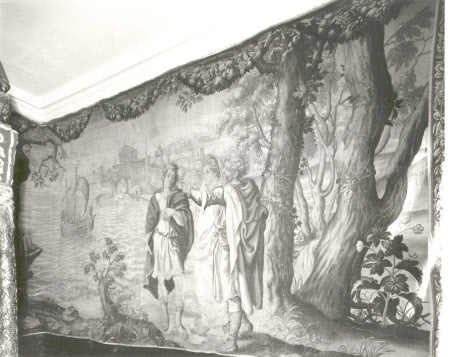 Tapestry, wool and silk, 7 warps per cm, Leander Taking Leave of his Parents from a set of three of the Story of Hero and Leander, Mortlake, after a design by Francis Cleyn, c. 1660-1690. Leander stands in the centre inclining his head towards his two aged parents who stand to his right, his mother wearing a pink and yellow gown and veil over her head and his father bearded and wearing an orange cloak over a blue tunic. To the right of the figures is a grove of oak trees. The figures are standing on a sea shore, and Leander’s father gestures with his hand out to sea. The city of Abydos extends along the edge of a harbour in the background to the left of the figures, and there is a sailing ship in the water. The sea takes up the left hand side of the scene which is framed on the far left by a large tree. The narrow integrated side borders are composed of leaves and flowers growing around a central stalk on a light blue green ground. At the top swags of fruit and flowers hang from the upper edge of the tapestry, illusionistically extending over the picture plane. There are no upper and lower borders.

On right-hand galloon, near the bottom (folded under): A white shield with a red cross, signifying manufacture in England