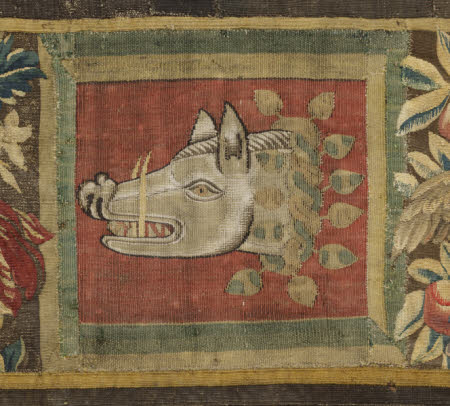 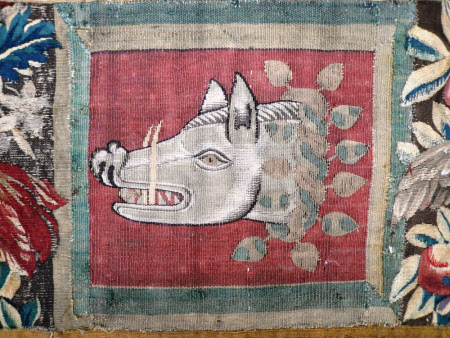 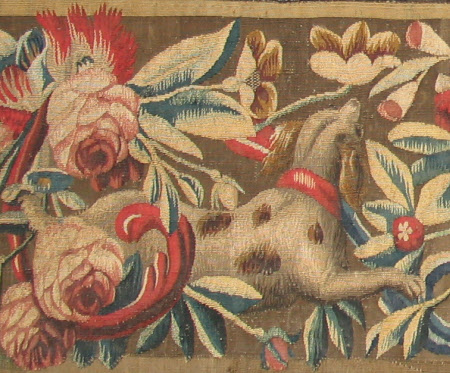 This is one of three surviving fragments that are among some of the earliest English tapestries in the National Trust’s collections. They date from the late 15th or early 16th century and were probably originally designed as part of a larger hanging, or possibly as cushion covers. The fearsome wild-boar heads with their sharp pointed tusks and a wreath of leaves were designed as part of family heraldry and can be associated with Sir Piers Edgcumbe (1468/9– 1539), who inherited the beautiful estate of Cotehele in Cornwall in 1489. He may have commissioned the tapestries from an English workshop, and they are very rare examples of English heraldic textiles. The tapestries were adapted, or perhaps rescued, in the 18th century, and three fragments were sewn into later Dutch or Flemish tapestries depicting fruit and flowers. This reuse indicates their importance in telling the history of the family dynasty and ensured the survival of these textiles.

Two border fragments with Boars’ Heads, tapestry, wool and silk, 5½ - 7 warps per cm, Flemish and possibly English, c. 1489-1700. A narrow strip of tapestry composed of sections from at least three different tapestries sewn together. The largest sections are part of a tapestry border with small dogs and monkeys playing amongst leaves and flowers on a brown ground. There is a brown galloon along the top edge which probably belongs to this border. Inserted into the brown border at each end are two squares of coarser tapestry with boars’ heads, their necks encircled by leaves, on a red ground with bands of white and pale blue round the edges. Along the bottom edge of the tapestry a narrow strip of border of a third type is sewn on, composed of a central pole bound with crossed ribbons woven in imitation of a carved wooden frame.