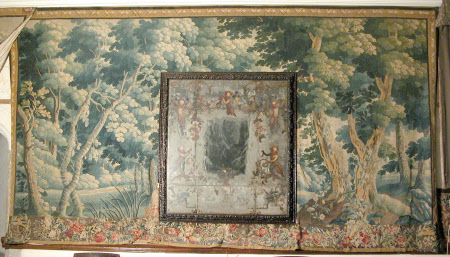 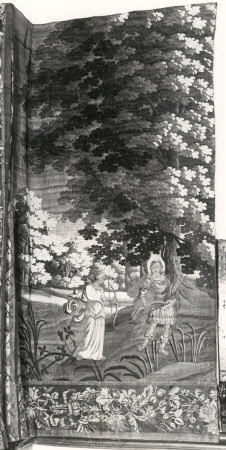 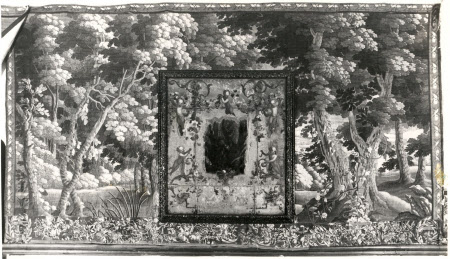 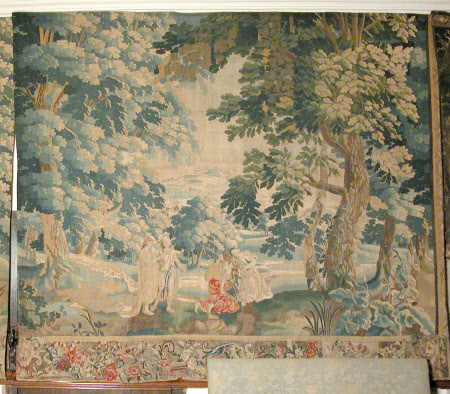 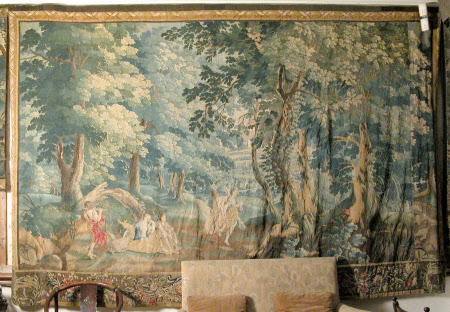 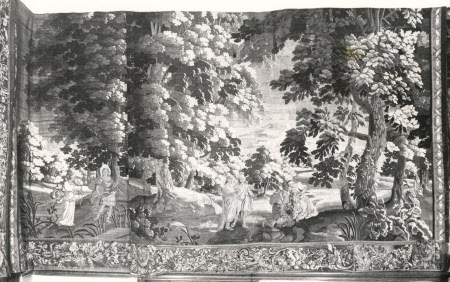 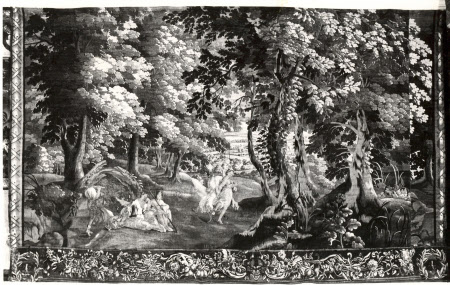 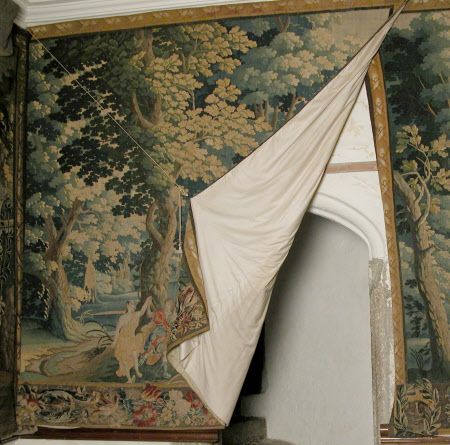 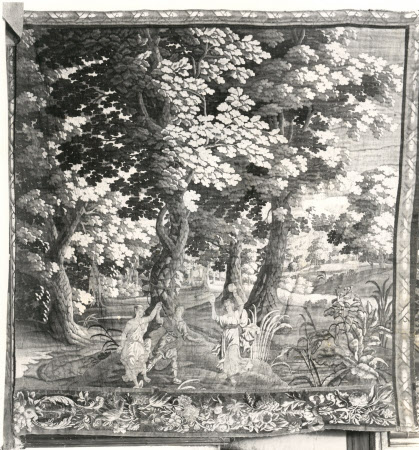 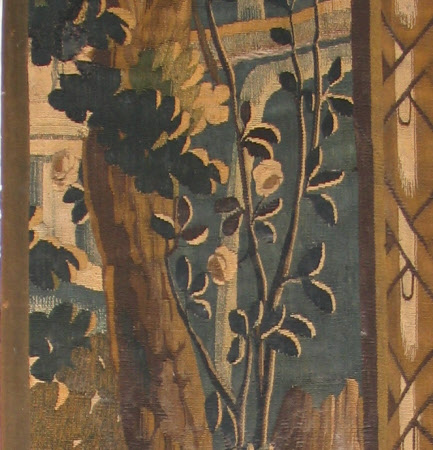 A set of six tapestries of the Verdures with Small Figures, tapestry, wool and silk, 7 warps per cm, Flemish, probably Antwerp or Oudenaarde, many of the figures after prints by Pierre Brebiette, c. 1680-1710.

Although little known today Pierre Brebiette was one of the most inventive and original of the seventeenth-century French painter-printmakers and was highly regarded by contemporary connoisseurs and collectors (Orléans 2002, pp. 8-9). The set of prints used in these tapestries, known as the ‘Douze Grandes Frises’ (‘twelve large friezes’) was made while Brebiette was in Rome in 1617-1624. The friezes are populated by a mixture of satyrs, vestal virgins, putti, goats and other animals engaged in revelry, dancing, feasting, religious rites and sacrifices, often overseen by a high priest or by a God such as Bacchus or Pan. All the images are permeated by a wild and dream-like atmosphere. The designer of the Cotehele ‘Verdures’ has used figures from three different prints from the ‘Grandes Frises’, reversing them and inserting them into the wooded landscape backgrounds that were the stock-in-trade of many late seventeenth-century Flemish tapestry producers. Brebiette’s figures are combined with others whose sources have not been identified, but which probably also derive from prints. There is no discernable narrative to the tapestry series but the scenes are united by a general pastoral theme, drawing on but toning down the unruly bacchanalian revelry of Brebiette’s prints and adding more civilised and contemplative elements such as the figure of Apollo, and a shepherd playing a flute to two pensive companions. None of the tapestries is signed, and it is difficult to assign them to a particular weaving centre. Tapestries described as ‘verdures with small figures’ appear frequently in the records of tapestry producers and dealers in many different weaving centres in the late seventeenth century. Such tapestries occur frequently, for example, in the records of the Antwerp firm the Wauters family who supplied so many of the tapestries at Cotehele; but many other Antwerp firms also produced them, as did weavers in Oudenaarde and other centres working for Antwerp dealers. Such tapestries were often cheaper than sets with large figures as they required less skill to weave, were made with a higher wool content, and were often, but not always, more coarsely woven than historical subjects. Nonetheless these tapestries should not be disregarded as unimportant. The Verdure was the descendant of the medieval ‘millefleurs’, and was extremely popular from the early period right through the seventeenth and eighteenth centuries. Surviving inventories reveal that in the sixteenth and seventeenth centuries ‘verdure’ tapestries formed the bulk of many tapestry collections. Composed largely of greenery sometimes interspersed with small figures and animals, a suit of verdure hangings could transform an interior such as the Dining Room at Cotehele into a forest or a garden. The lower borders on all five tapestries in the set have been attached from the ‘Orpheus and Eurydice’ series, only one panel from which survives at Cotehele, in the Dining Room (348246). The tapestries have hung in the Dining Room at Cotehele since at least c. 1840, when they were noted by the Rev. Arundell – he identified the figures of Diana and Apollo in 348247.1, but noted that it was “not easy to decide upon” the subject of the series (Arundell 1840, p. 13). (Helen Wyld, 2010)