The Tomb of Sir Richard Edgcumbe (d.1489) at Morlaix 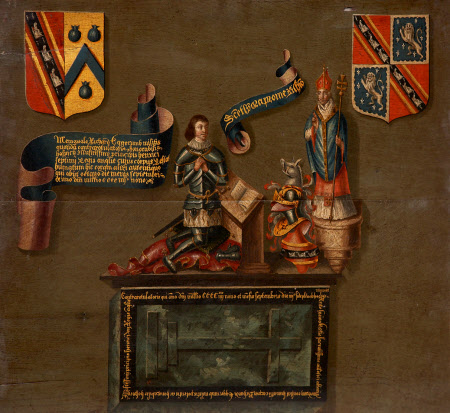 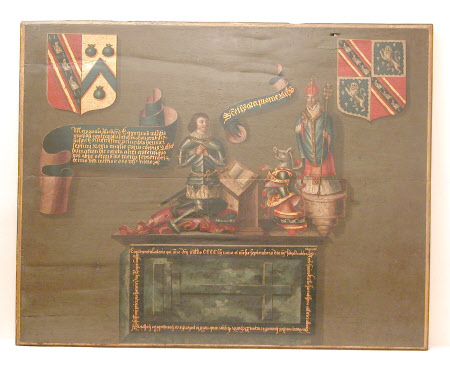 Oil painting on oak panel, and associated sketch on vellum: The Tomb of Sir Richard Edgcumbe (d. 1489) at Morlaix, British (English) School, 18th century.Two figures are seen on a tomb, flanked by two coats-of-arms. Sir Richard Edgcumbe, as a knight, is kneeling on the tomb on the left, at a prieu-dieu before a statue of a bishop and a boar figurine. The tomb is decorated with a horizontal cross, surrounded by an inscription (1). To the knight's right is a scroll with a detailed inscription (2), above which is one of the coats-of-arms and to his right another scroll, as if coming for his mouth, with a single lined inscription (3). The painting is probably based on COT.D.2 (NT 347613).The tomb, which was destroyed in the Revolution, was at Morlaix in Brittany, where Sir Richard Edgcumbe died in 1489. Inscription (1) reads "Before the central high altar of this church there is buried the body of Richard Edgcumbe, mighty knight and keeper of the records of the Hospital of the most excellent Prince Henry VII of England, who full of faith in the year 1489 and on the 4th day of September was buried from the light". Inscription (2) reads "To the memory of Richard Edgcumbe, Knight, most honourable keeper of the Records of the most excellent hospital of Prince Henry the seventh of England, whose body remains here buried by the high altar, who died on the 8th day of September 1489". (Note conflict of date). Inscription (3) reads "Saint Thomas pray for me, Richard." This item was probably originally intended to be displayed in the Chapel-in-the-Wood, complementing the inscribed plaque which tells the story of Richard Edgcumbe's escape from the King's men in 1483 (169301).