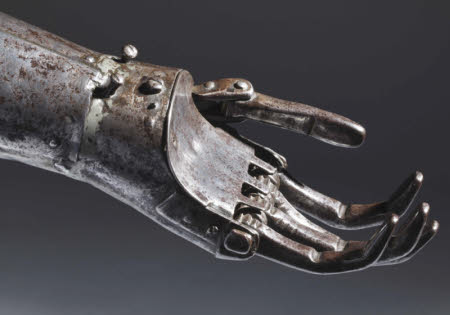 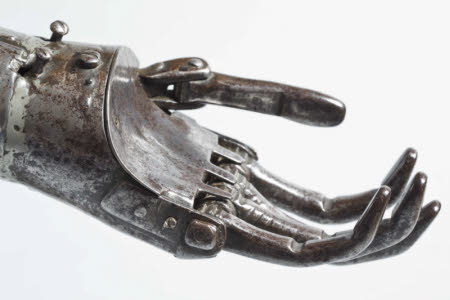 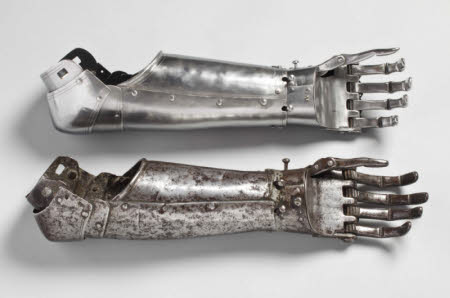 Terrible injuries on the bloody battlefields of Europe in the 16th and 17th centuries led surgeons to design elaborate prostheses for lost limbs. These were usually made by armourers and the moveable fingers in this mechanical vambrace can lock into place, enabling a soldier to grip his reins or sword. It’s not known how this rare survivor of a brutal period in European history came to Cotehele in Cornwall, but in 1947 the Earl of Mount Edgcumbe related a story of his father’s late-night encounter with this most unusual piece of armour. Awakened in the middle of the night by a sound of someone breaking a window, the Earl groped his way in the dark, searching for a pair of ancient pistols hanging on the wall of the Banqueting Hall. Suddenly, he felt his wrist tightly gripped by cold fingers. Grappling to free himself, he fled back to his bedroom in horror. The next morning, in braver mood, he discovered that the fingers belonged to the mechanical arm and that the burglar had been a cow, scraping her horns against the window bars. Although the Earl was adamant that Cotehele was never haunted, others beg to differ and believe that this atmospheric Tudor house has more than a whiff of the paranormal about it.

Mechanical arm for left hand, fingers lock into place by a stud to enable grip on reins or weapon. It weighs 1.274 Kilos (2lb 13oz). It was previously thought to be German, but recent research suggests it may be French. Felix Fischborn, placement student at Cotehele in 2008, researched this item: “This mechanical hand is a rare survivor. Someone who had lost his left hand could put his forearm into the vambrace protecting the lower arm and attach the prosthesis to the rest of his armour. Three buttons can lock the five cast fingers into place. One button on the side of the wrist controls the thumb, another on the underside of the wrist locks or loosens index and middle finger whilst the third, next to the second, is there for ring finger and little finger. Each finger can be put into another position, ratchets and studs keep them in place. Throughout the 16th and 17th centuries Europe was torn by wars. Gunshots and arrow wounds, fractures and dislocations, burns and gashes were treated by the surgeons accompanying the military campaigns. Medical services were not centrally organised, but in England the Royal Sergeant Surgeon could urge surgeons to serve with the monarch’s forces for the duration of a campaign. Some surgeons who published books or treatises on their profession had gathered their information on the battlefields of their times. Among them are Ambroise Paré who published Dix livres de la chirurgie in 1564 and John Woodall and his The surgeons mate of 1617. Ambroise Paré was a surgeon under François I serving the generals in command of infantry of the French army. Besides describing new methods of treatment and revolutionary operation techniques, he depicted mechanical hands, too. The prints shown are taken from his books and from an English translation published in 1634. They show that some of these prostheses were rather simple whilst others were highly mechanized devices, enabling otherwise lost functions of the limb. In the 16th century prostheses were usually made by armourers. Some were made in collaboration with locksmiths or clockmakers. Though artificial limbs have been made since antiquity – Pliny the Elder (AD 23 or 24 to AD 79) mentions a Roman nobleman who fought in the Second Punic War (218 to 201 BC) with an iron hand and an Egyptian mummy with a prosthetic foot was found, too – this artificial hand is a rare survivor. As with most of the objects at Cotehele, we do not know how it came here. First evidence of the hand at Cotehele is given in the lithographic print made after a watercolour painted in the 1830s by Nicholas Condy. This print is on display in the Breakfast Room, and it shows the hand hanging on the North wall of the Hall, similar to its current position.” A replica was made by Context Engineering, Powys, in 2009 (348927). Cotehele’s mechanical hand features in ‘Mechatronic Hands: Prosthetic and Robotic Design’ by Paul H. Chappell, published by the Institution of Engineering and Technology (2016). ISBN 978-1785611544.