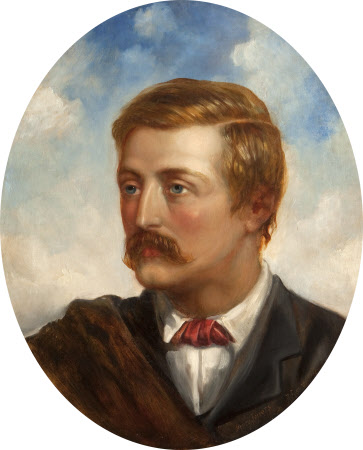 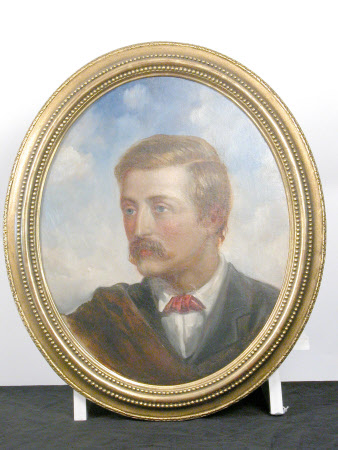 Oil painting on paper (oval), Henry Ferrers Ferrers (formerly Croxon) by Rebecca Dulcibella Ferrers Orpen (1830-1923). An oval, head-and-shoulders portrait of the sitter, facing the spectator but with his head turned towards the left and looking in the same direction. He has short, fair hair with a long moustache and blue eyes. He wears a black jacket and a white shirt with a red cravat tied under the collar. A brown fur is draped over his right shoulder. He is set against a background of blue sky and white clouds. One of a pair of oval portraits in gilded frames. A companion to 343533, a portrait of Beatrice Petre, who became Henry Ferrers Ferrers wife. Henry Ferrers Ferrers (1848-1923). From 1885 his name was changed to Ferrers Ferrers; son of Boydell Croxton of Erway, Salop and Constance Charlotte Ferrers; married on 11 February 1879 the Hon. Beatrice Mary Petre (1858-1930) the daughter of Hon. Arthur Charles Augustus Petre (1827-1882) of Coptfold Hall, Essex (the son of William Henry Francis Petre, 11th Baron Petre) and Lady Katherine Howard (d.1882). They had three sons: (i) Edward Arthur Joseph Ferrers (1881-1934) (ii) Francis Compton Charles Ferrers (1882- killed in action 1918) (ii) Bernard Compton Ferrers (1884-1969)