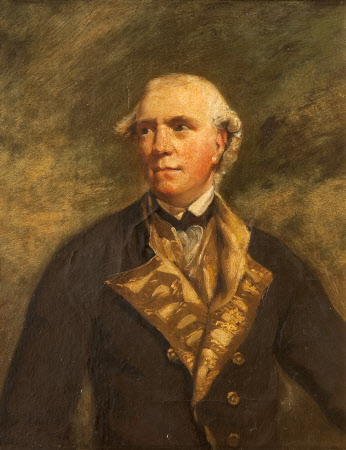 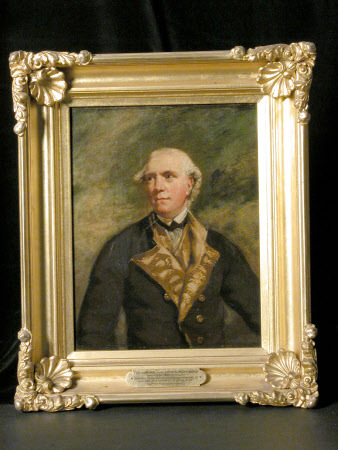 Oil painting on canvas, Admiral the Hon. Samuel Barrington (1729-1800), after Sir Joshua Reynolds PRA (Plympton 1723 - London 1792). A half-length portrait of the sitter who faces the spectator, his head turned to the left and looking slightly upwards. He wears a short powdered wig which has lifted off at the left side, suggesting that he is standing in strong wind. His arms are slightly raised to the sides as if to aid balance. He wears a blue naval coat with gold frogging and brass buttons, an officer's full-dress uniform as worn in 1767-1783. The scumbled background of white, green and black is suggestive of stormy weather. The original painting by Reynolds (1779) is in the collection of the National Maritime Museum, Greenwich. He was the fourth son of John Shute Barrington, 1st Viscount Barrington (1678–1734) and Anne Daines. He entered the Navy at an early age in 1741, became a lieutenant in 1745. Saw service throughout the Seven Years War. Served under Hawke in Basque Roads expedition, 1757; under Rodney at destruction of shipping at Havre-de-Grâce, 1759; with Hon. J. Byron at Louisbourg, 1760, and with Keppel at Belle Isle, 1761. Served as flag-captain under the Duke of Cumberland, 1768; attached to Channel Fleet 1771–4. In 1778 he was C-in-C West Indies and subsequently 2nd in command to Howe at Gibraltar. He had a reputation in the service for kind-heartedness and humanity. He was made an admiral in 1787. He died at Bath, unmarried.