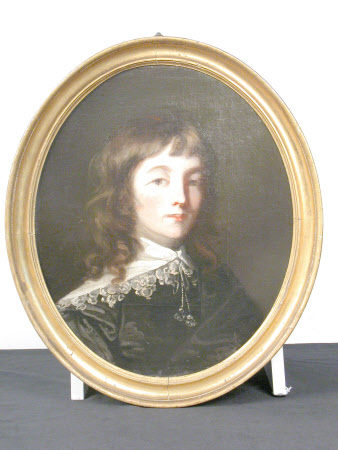 Oil painting on canvas (oval), Cornish Gambier (1762-1799) as a Boy by Margaret Gambier, Lady Middleton (d.1792), circa 1770/75. An oval, head-and-shoulders portrait of a young boy dressed in black Van Dyck costume with his brown hair falling in ringlets onto his shoulders. Cornish Gambier was the third son of John Gambier (1723-1782), Lieut-Governor of the Bahamas and Deborah Stiles (b.1766). He was in the civil service of the East India Company and died in Madras. He was also the brother of James Gambier, 1st and last Baron Gambier of Iver. The artist, Margaret Gambier, Lady Middleton, was the sitter's aunt, daughter of the barrister James Gambier, and sister of Vice-Admiral James Gambier (1723-1789) and John Gambier (1724/5-1782), Lieut-Governor of the Bahamas (one of whose sons was the sitter, Cornish Gambier). In 1761 she married Chatrles Middleton (1726-1813), created a baronet in 1781, with special remainder to their son-in-law, Gerard Noel Edwards, afterwards Sir Gerard Noel Noel, 2nd Bt. (1759-1838), ancester of the Earls of Gainsborough, and after her death created Baron Barham, with special remainder to his wife, their daughter, Diana (1762-1823), and her male issue (so that the title is now subsumed in that of the Earls of Gainsborough). She was also the aunt of Harriett Iremonger, and so great-aunt of her daughter Georgiana, Lady Chatterton, who subsequently married Edward Dering, which no doubt accounts for the presence of this picture and its pendant at Baddesley Clinton.