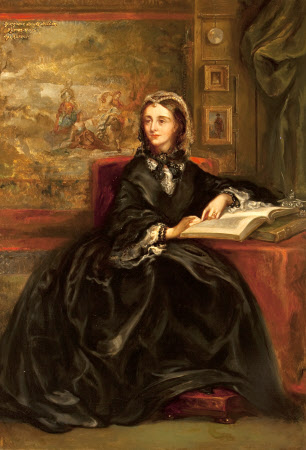 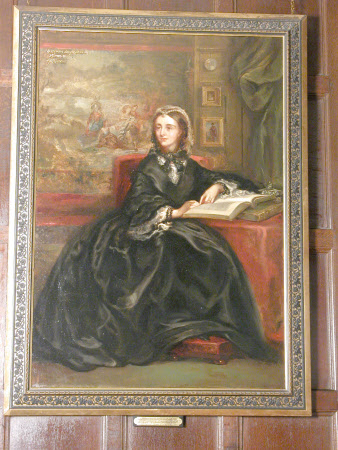 Oil painting on canvas, Henrietta Georgiana Marcia Lascelles Iremonger, Lady Chatterton (1806 – 1876), Mrs Edward Heneage Dering, by Rebecca Dulcibella Ferrers Orpen, later Mrs Edward Dering (1830 – 1923), after Richard Buckner, inscribed. A full-length portrait of Lady Chatterton who sits at a table in the dining room of her house, Finchden in Kent, resting her hands on a large open book and looking towards the left. She wears a full-skirted black silk dress with white lace at the cuffs and neck. Her brown hair is dressed with a white lace cap trimmed with pearls and there is a black bow under her chin. Hanging on the wall behind her is a tapestry on the subject of Europa and the Bull which hung in the dining room at Finchden until she brought it with her to Baddesley Clinton and hung it in the Great Parlour. Henrietta Georgiana Marcia Iremonger was the daughter of Reverend Lascelles Iremonger. She married, (i) Sir William Abraham Chatterton, 2nd Bt., (1794-1855) son of Sir James Chatterton, 1st Bt. and Rebecca Lane, on 3 August 1824. and (ii) Edward Heneage Dering, (1826-1892) son of Reverend Cholmeley Edward John Dering, on 1 June 1859. She died on 6 February 1876