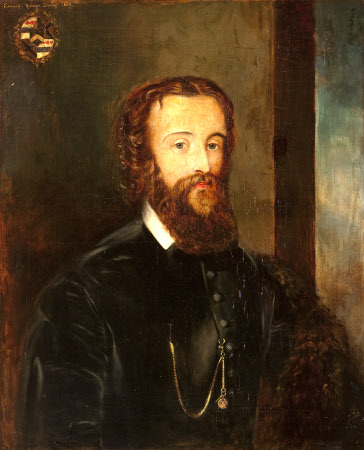 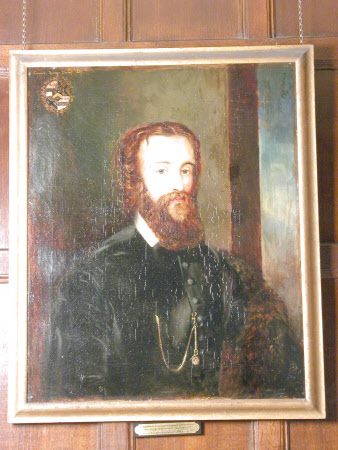 Oil painting on canvas, Edward Heneage Dering (1826-1892), half-length, by a window, by Rebecca Dulcibella Orpen, later Mrs Edward Dering (1830 – 1923), inscribed and dated 1859. A half-length portrait of Edward Dering, turned slightly to the right and looking out beyond the spectator. He has striking red hair with a full beard and moustache. He wears a black coat with buttons up to the neck and a white collar. A fur-trimmed cloak hangs from his left shoulder and a fob on a chain is clipped to his chest. A coat of arms is painted at top left and a window with blue sky and clouds is to the right. The companion to 343206, a portrait of Georgiana, Lady Chatterton, who became his wife. Built service wing at Baddesley Clinton. Married (i) in 1859, Georgiana, Lady Chatterton (1806-1876) the widow of Sir William Chatterton (1794-1855) and (ii) in 1885, Rebecca Dulcibella Orpen, Mrs Marmion Edward Ferrers (1830-1923)