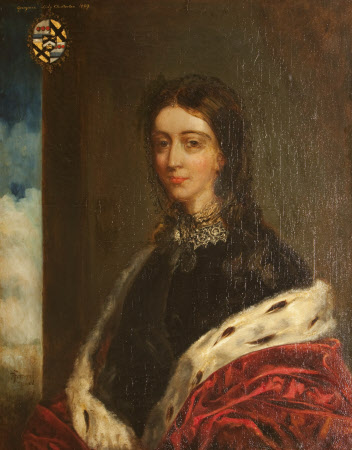 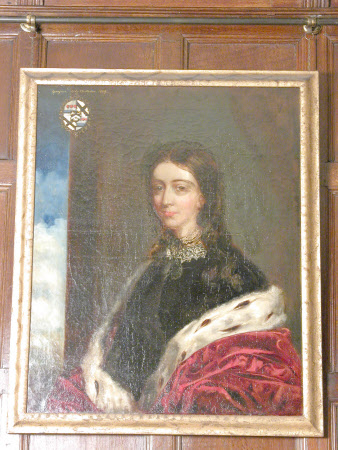 Oil painting on canvas, Henrietta Georgiana Marcia Lascelles Iremonger, Lady Chatterton (1806 – 1876), Mrs Edward Heneage Dering, by Rebecca Dulcibella Orpen, later Mrs Edward Dering (1830 – 1923), signed and dated 1859. A half-length portrait of the sitter who is seated and turned towards the left, looking out at the spectator. Her long brown hair is worn loose around her shoulders and she wears a black dress with a white lace collar. A crimson cloak trimmed with ermine hangs from her shoulders. A curtain hangs behind her to the right and a window through which blue sky and clouds can be seen is to the left. A coat of arms is painted at top left. The portrait was painted at the time of her marriage to Edward Dering, when she was still in mourning for her first husband and is the companion to 343207, a portrait of Edward Dering. Henrietta Georgiana Marcia Iremonger was the daughter of Reverend Lascelles Iremonger. She married, (i) Sir William Abraham Chatterton, 2nd Bt., (1794-1855) son of Sir James Chatterton, 1st Bt. and Rebecca Lane, on 3 August 1824. and (ii) Edward Heneage Dering, (1826-1892) son of Reverend Cholmeley Edward John Dering, on 1 June 1859. She died on 6 February 1876