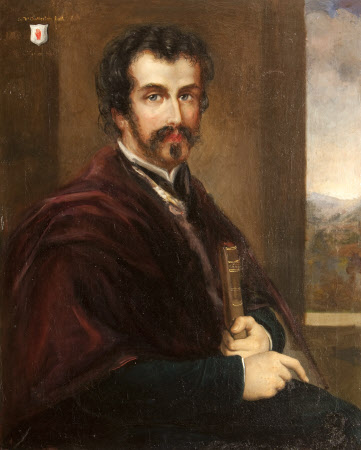 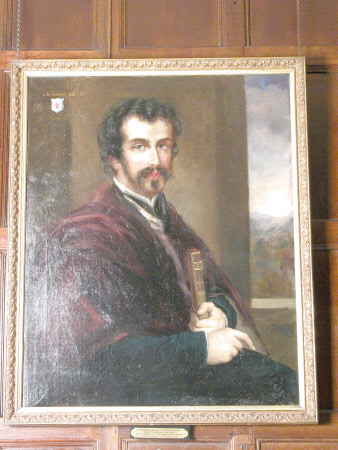 Oil painting on canvas, Sir William Abraham Chatterton, 2nd Baronet Chatterton (1794-1855) by Rebecca Dulcibella Ferrers Orpen, later Mrs Edward Dering (1830 – 1923), inscribed. A half-length portrait of Sir William who sits facing right looking out at the spectator. He has short, dark curly hair and a half beard with moustache. He wears a red cloak or academic hood around his shoulders and a black jacket underneath. He holds a book to his chest with his left hand and rests his right arm across his knee. There is an open window to his left and a coat of arms is painted at top left. Sir William Abraham Chatterton, 2nd Baronet Chatterton was born on 5 August 1794. He was the son of Sir James Chatterton, 1st Bt (d.1806), and Rebecca Lane (d.1838). He married as her first husband, Henrietta Georgiana Marcia Iremonger (1806-1876), daughter of Reverend Lascelles Iremonger, on 3 August 1824. She later married Edward Heneage Dering (1826-1892). He died in 1855, without issue.