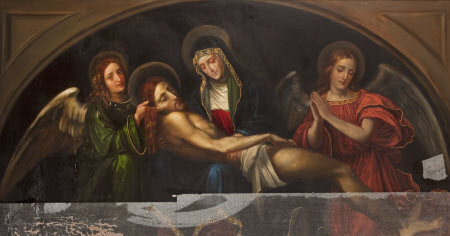 Oil painting on canvas (lunette), Pietà (after Francesco Francia) by Rebecca Dulcibella Orpen, later Mrs Edward Dering (1830 – 1923). Christ's dead body is held by the Virgin Mary in her lap. His head is held by an angel while another looks at the wounds in his feet. The original is in the collection of the National Gallery, London.