Self-portrait in her Painting Room at Baddesley Clinton 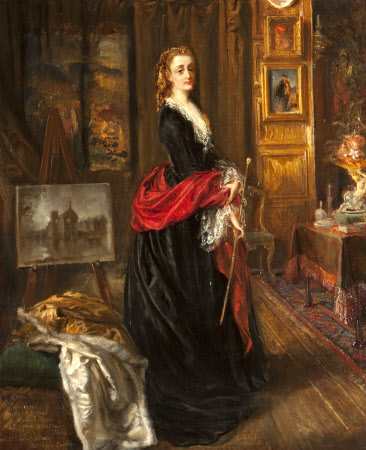 Oil painting on canvas, Self-portrait in her Painting Room at Baddesley Clinton, by Rebecca Dulcibella Ferrers Orpen, later Mrs Edward Dering (1830 – 1923). A full-length portrait of the artist, in the Banqueting Room, which she used as her studio, at Baddesley Clinton, wearing a long dress and standing to right and looking towards the spectator, a mahlstick in her hand. On an easel behind her is a small unfinished cameo of the house; on the wall at the right hangs the sketch of Edward Dering which appears in this list as No.34. Inscribed. Daughter of Abraham Orpen. Married (i) 1867 Marmion Edward Ferrers (1813-1884) and (ii) in 1885 Edward Henege Dering (1826-1892) Retained Baddesly Clinton for her lifetime