Triptych with Christ crucified with Saint Mary Magdalen (after Pietro Perugino), and Saint Francis and Saint Anthony of Padua 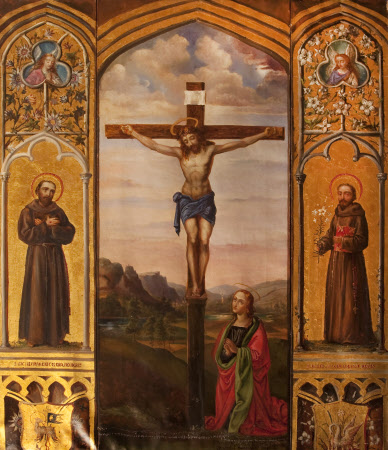 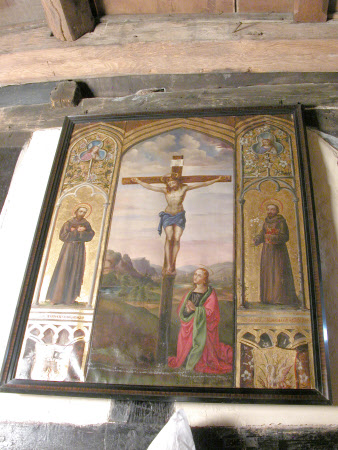 Oil painting on canvas, Triptych with Christ crucified with Saint Mary Magdalen (after Pietro Perugino) and Saint Francis and Saint Anthony of Padua, by Rebecca Dulcibella Ferrers Orpen, later Mrs Edward Dering (1830 – 1923), signed and dated 1890. The central panel is painted after Perguino's Crucifixion in the church of San Maria Maddalena dei Pazzi, Florence. Christ on the cross wearing a blue loincloth in a mountainous landscape, the Magdalen clothed in red and kneeling in prayer at the foot of the cross on the right. There are two further panels to left and right, each of which have three parts, bottom, middle and top, and which are framed within painted architectural tracery on a background of gold leaf. Two Franciscan Saints occupy the middle panels, the Saint on the right holds a lily and a book and is probably St Francis. The bottom panels are decorated with heraldic shields, the shield on the right featuring a pelican feeding its young, which is a symbol of the crucifixion. The top panels on both sides feature the head and shoulders of an angel.