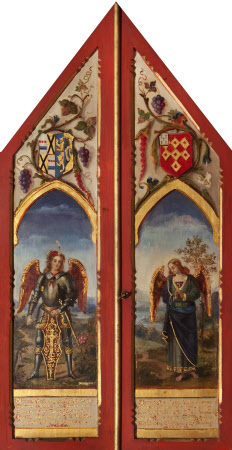 Oil painting on panel, Triptych: Evening Landscape with River and Mountains (centre); inner faces of wings: The Madonna adoring her Son (left) and Saint John in adoration(right); outer faces of wings: The Archangels Michael and Raphael (?) (after Pietro Perugino), with the arms of Ferrers and Dering above by Rebecca Dulcibella Ferrers Orpen, later Mrs Edward Dering (1830 – 1923), signed and dated 1884. There are legends painted at the bottom of the doors. The left hand door reads: 'Of your Charity say an Ave Maria for / Eternal repose of the Carver and / Donors of this beautiful Spanish / Crucifix enshrined in this Trptich (sic) / painted by me AD MDCCCIV'. The right hand door reads: 'It was given by Cecil Marchioness of / Lothian to Esmerelda Hare and by / her brother Augustus Hare bequeath / ed to me his cousin for our Chapel at / Baddesley Clinton - RD Dering'. The crucifix mentioned, BAD/SC/4, is currently in the Blue Bedroom.