The Coronation of the Virgin (after Jacopo di Cione) 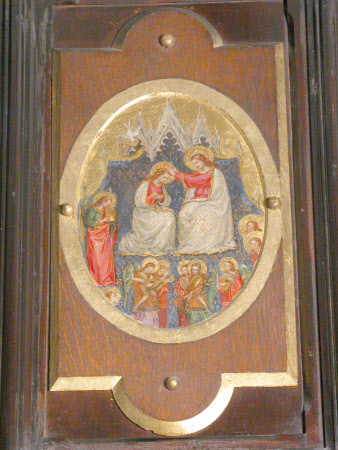 Oil painting on panel, The Coronation of the Virgin, after the altarpiece attributed to Jacopo di Cione (National Gallery, London), by Rebecca Dulcibella Ferrers Orpen, later Mrs Edward Dering (1830 – 1923), 1877. Against a backdrop of blue cloth patterned with gold fleur-de-lys, the Virgin kneels before and is crowned by a Christ-like male figure. There are three pairs of music-making angels below. Another figure at the far left holds a tablet.