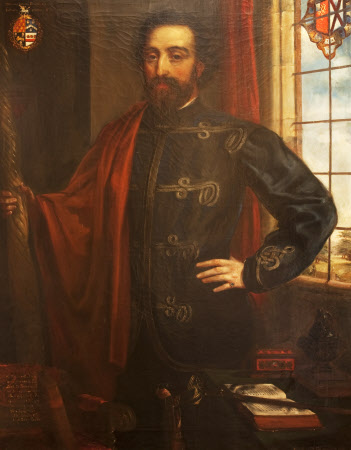 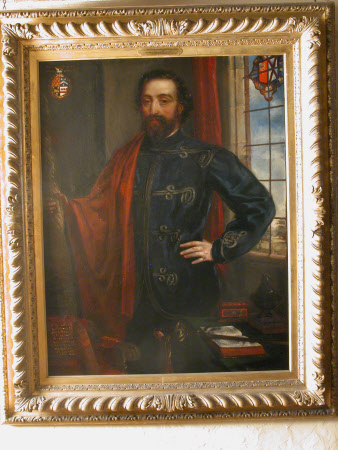 Rebecca Orpen was a talented amateur artist who married Marmion Edward Ferrers (1813-84) of Baddesley Clinton. She was prolific, working in both oil and watercolour, and much of her work remains in the house today. She and her husband lived at Baddesley with her aunt, Lady Chatterton and her husband, Edward Heneage Dering. They became known as ‘The Quartet’, revelling in art, history and their religion. On the death of their spouses, Rebecca and Edward Dering were married. The narwhal tusk held by the sitter is still at Baddesley Clinton. It was reputedly given to William de Ferrers, 5th Lord Ferrers of Groby upon his retirement as British ambassador to France.

Oil painting on canvas, Captain Marmion Edward Ferrers holding a Narwhal Horn by Rebecca Dulcibella Orpen (1830-1923), inscribed, signed and dated, 1870. A three-quarter-length portrait of the artist's first husband standing looking out at the spectator with his left hand on his hip and holding a narwhal horn in his right. He has dark brown hair and a short beard with a moustache. He wears a dark blue velvet house coat trimmed with russia braid and a scarlet cloak is thrown over his right shoulder. There is a desk and other objects in the foreground, including a red box and a small black bust. Behind the sitter to the right is a window with a leaded pane of stained glass describing a coat of arms. A view of landscape and blue sky can be seen through it. There is a painted coat of arms at top left. The narwhal horn seen in the painting is still at Baddesley Clinton. He was the son of Edward Ferrers (1790-1830) and Lady Harriet Townshend (d.1845) the daughter of George Townshend, 16th Baron Ferrers of Chartley, 2nd Marquess Townshend and Earl of Leicester of Tamworth Castle; married Rebecca Dulcibella Orpen (1830-1923) as her first husband. They were joined at Baddesley Clinton by Edward Heneage Dering (1826-1892) and his wife Georgiana, Lady Chatterton (1806-1876) the widow of Sir William Chatterton (1794-1855), and the life of the four friends, known to each other as 'The Quartet' and their obsessive interest in the history of the house, is attested by the numerous paintings of them which were done by Dulcibella. After Marmion Edward's death, in 1885 she married Edward Dering, by then a widower.