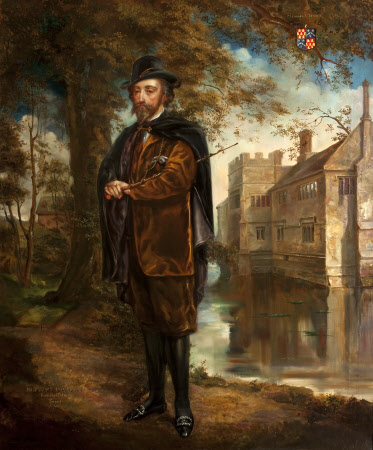 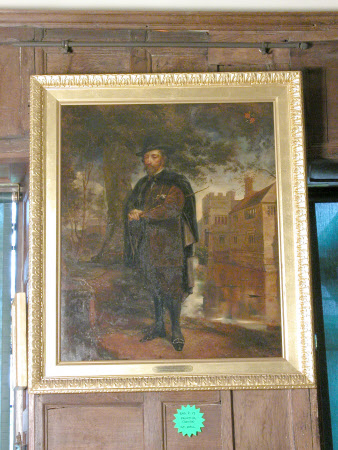 Oil painting on canvas, Marmion Edward Ferrers (1813-1884), 'The Squire's Evening Walk' by Rebecca Dulcibella Orpen (1830-1923), inscribed and signed: R. Ferrers. A coat of arms is painted at top right. A portrait of the artist's first husband standing full-length on a path beside the moat at Baddesley Clinton, the house seen behind him to the right. He is turned slightly towards the left and looks out at the spectator. He wears a brown jacket with plus fours, black stockings and black shoes with silver buckles. A black velvet cape is arranged around his shoulders and he wears a black, wide-brimmed hat above brown hair and a beard with a long moustache. He holds a cane in his right hand and under his left arm. There is a mooring post in the left foreground and a large tree on the path behind the sitter which spreads its branches into the sky above. The sky is darkening overhead and there is a reddish glow in the upper window of the gatehouse. Another portrait of the sitter, 'The Squire's Walk', see NT 343144, is very similar in setting and costume.