Marmion Edward Ferrers (1813-1884) out walking (possibly in the Highlands) 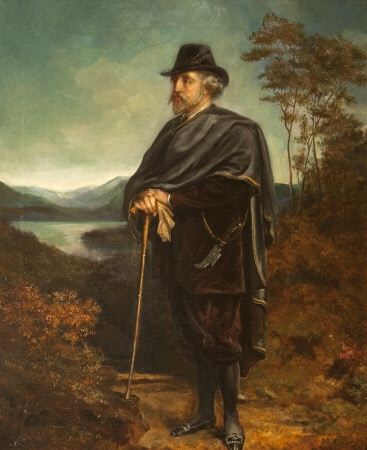 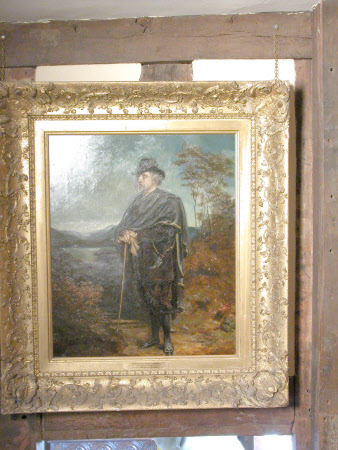 Oil painting on canvas, Marmion Edward Ferrers (1813-1884), out walking (possibly in the Highlands) by Rebecca Dulcibella Ferrers Orpen, later Mrs Edward Dering (1830-1923), inscribed and signed. A portrait of the artist's first husband in late middle age, who stands full length turned slightly towards the left and looking in the same direction. He is located in an elevated, autumnal heathland landscape with lakes and mountains visible in the distance behind him. His hair and beard are grey and he wears a dark brown jacket with plus fours and black shoes with silver buckles. A purple cape with a red-brown lining is draped around his shoulders and he wears a black wide-brimmed hat with a red feather. He holds a pair of pale yellow gloves and a cane in his right hand, his left hand resting on top and the cane lodged against a rock. 343146 is a related oil sketch. Marmion was the son of Edward Ferrers (1790-1830) and Lady Harriet Townshend (d.1845), the daughter of George Townshend, 16th Baron Ferrers of Chartley, 2nd Marquess Townshend and Earl of Leicester of Tamworth Castle; married Rebecca Dulcibella Orpen (1830-1923) as her first husband. They were joined at Baddesley Clinton by Edward Heneage Dering (1826-1892) and his wife Georgiana, Lady Chatterton (1806-1876) the widow of Sir William Chatterton (1794-1855), and the life of the four friends, known to each other as 'The Quartet' and their obsessive interest in the history of the house, is attested by the numerous paintings of them which were done by Dulcibella. After Marmion Edward's death, in 1885 she married Edward Dering, by then a widower.