Edward Heneage Dering (1826-1892), standing, in boots and cloak (possibly in the Highlands) 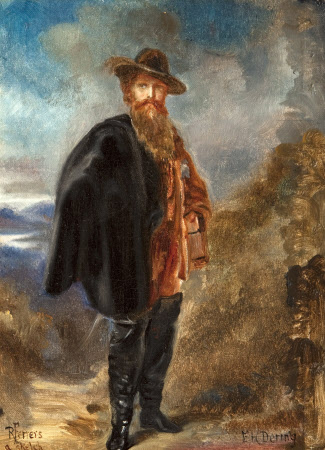 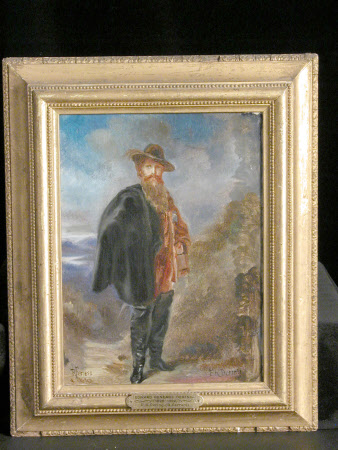 Oil painting on canvas, Edward Heneage Dering (1826-1892), standing in boots and cloak (possibly in the Highlands) by Rebecca Dulcibella Ferrers Orpen, later Mrs Edward Dering (1830-1923), inscribed: E. H. Dering; and signed: R Ferrers a sketch. A full-length portrait of the artist's second husband who stands on a path with a landscape of lakes and mountains behind him. The sitter has striking red hair and a long red beard with a moustache. A black cloak hangs from his right shoulder and he wears a trilby with a feather in the brim. He is turned slightly towards the right and rests his left hand on his hip. He wears a long-length brown coat and thigh-length black leather boots. The setting is identical to that seen in the portrait and the related oil sketch of the artist's first husband, Marmion Edward Ferrers (See 343166 and sketch 343146). Rebecca Orpen presumably made these oil sketches of the two men on the same occasion, but worked up only that of Marmion Edward Ferrers into a finished oil portrait.