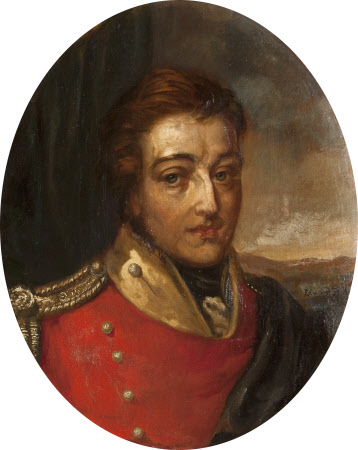 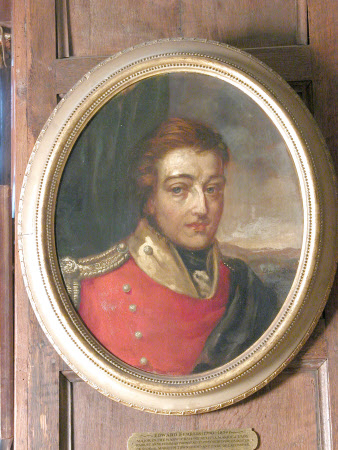 Rebecca Orpen was a talented amateur artist who married Marmion Edward Ferrers (1813-84) of Baddesley Clinton. She was prolific, working in both oil and watercolour, and much of her work remains in the house today. She and her husband lived at Baddesley with her aunt, Lady Chatterton and her husband, Edward Heneage Dering. They became known as ‘The Quartet’, revelling in art, history and their religion. On the death of their spouses, Rebecca and Edward Dering were married. Edward Ferrers was the father of Marmion Edward. In 1813 he married Lady Harriet Townshend, and it was through her that Edward Marmion became co-heir of the barony of Ferrers of Chartley.

Oil painting on panel (oval), Edward Ferrers (1790-1830) by Rebecca Dulcibella Orpen (1830-1923), inscribed and signed. A head-and-shoulders portrait (post-humous) of Edward Ferrers as a young man, turned slightly towards the right and looking out at the spectator. He has short red hair and blue eyes and wears a red and gold military uniform with a blue sash across his left shoulder. There is a green curtain behind him to the left and a landscape with storm clouds to the right. Possibly after a miniature of around 1830. Son of Edward Ferrers (1765-1795) and Helena Alexander (d.1840) daughter of George Alexander of Stirtloe; married Lady Harriet Townshend (d.1845) the daughter of George Townshend, 16th Baron Ferrers of Chartley, 2nd Marquess Townshend and Earl of Leicester of Tamworth Castle.