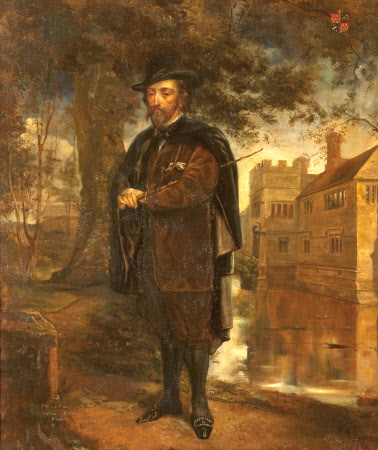 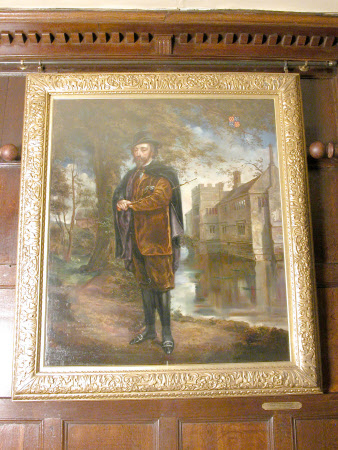 Rebecca Orpen was a talented amateur artist who married Marmion Edward Ferrers (1813-84) of Baddesley Clinton. She was prolific, working in both oil and watercolour, and much of her work remains in the house today. She and her husband lived at Baddesley with her aunt, Lady Chatterton and her husband, Edward Heneage Dering. They became known as ‘The Quartet’, revelling in art, history and their religion. On the death of their spouses, Rebecca and Edward Dering were married. This portrait of her husband, who was affectionately known as ‘The Old Squire’ in Warwickshire, shows Baddesley Clinton, with the moat, in the background.

Oil painting on panel, Marmion Edward Ferrers (1813-1884): 'The squire's evening walk' by Rebecca Dulcibella Orpen (1830-1923), inscribed and signed with a coat of arms at top right, circa 1870. A full-length portrait of the artist's first husband who stands on a path beside the moat at Baddesley Clinton. The house is seen in the background to the right. The sitter is turned slightly towards the left but looks out at the spectator. He wears a light-brown velvet jacket with plus fours, black stockings and shoes with silver buckles. On his head is a trilby-style hat above brown hair and a beard with a long moustache. A black cloak with a purple lining is worn around his shoulders. He holds a cane in his right hand and under his left arm. The scene is brightly lit and white cloud in the background sky gives way to patches of blue. There is a mooring post behind and to the right of the sitter and a large tree on the path behind him which spreads its branches into the sky above. Another painting entitled 'The Squire's Evening Walk' (See 343171) is very similar in setting and costume. Son of Edward Ferrers (1790-1830) and Lady Harriet Townshend (d.1845) the daughter of George Townshend, 16th Baron Ferrers of Chartley, 2nd Marquess Townshend and Earl of Leicester of Tamworth Castle; married Rebecca Dulcibella Orpen (1830-1923) as her first husband. They were joined at Baddesley Clinton by Edward Heneage Dering (1826-1892) and his wife Georgiana, Lady Chatterton (1806-1876) the widow of Sir William Chatterton (1794-1855), and the life of the four friends, known to each other as 'The Quartet' and their obsessive interest in the history of the house, is attested by the numerous paintings of them which were done by Dulcibella. After Marmion Edward's death, in 1885 she married Edward Dering, by then a widower.