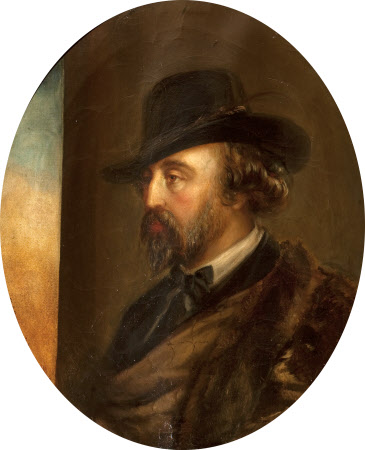 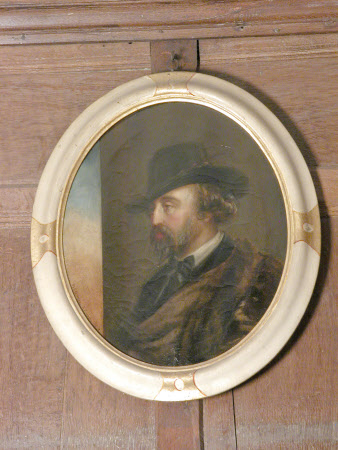 Oil painting on panel (oval), Marmion Edward Ferrers (1813-1884), in three-quarters profile to the left, in a hat, by Rebecca Dulcibella Orpen (1830-1923), signed. A head-and-shoulders portrait of the artist's first husband. He is turned towards the left, almost in profile. He wears a black jacket with black cravat and a brown fur-collared coat hangs from his left shoulder. He has a beard and moustache and wears a dark-brown hat with a wide brim above longish brown curls. He is set against the corner of a building and rose-tinted cloud and blue sky are seen beyond the edge at the far left. Son of Edward Ferrers (1790-1830) and Lady Harriet Townshend (d.1845) the daughter of George Townshend, 16th Baron Ferrers of Chartley, 2nd Marquess Townshend and Earl of Leicester of Tamworth Castle; married Rebecca Dulcibella Orpen (1830-1923) as her first husband. They were joined at Baddesley Clinton by Edward Heneage Dering (1826-1892) and his wife Georgiana, Lady Chatterton (1806-1876) the widow of Sir William Chatterton (1794-1855), and the life of the four friends, known to each other as 'The Quartet' and their obsessive interest in the history of the house, is attested by the numerous paintings of them which were done by Dulcibella. After Marmion Edward's death, in 1885 she married Edward Dering, by then a widower.