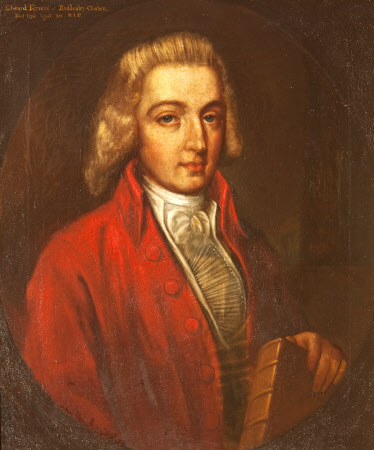 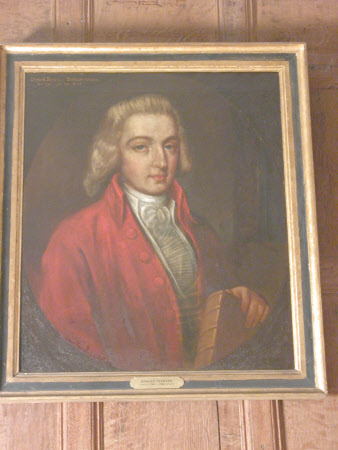 Rebecca Orpen was a talented amateur artist who married Marmion Edward Ferrers (1813-84) of Baddesley Clinton. She was prolific, working in both oil and watercolour, and much of her work remains in the house today. She and her husband lived at Baddesley with her aunt, Lady Chatterton and her husband, Edward Heneage Dering. They became known as ‘The Quartet’, revelling in art, history and their religion. On the death of their spouses, Rebecca and Edward Dering were married. The sitter is the grandfather of Rebecca’s husband, Marmion Edward Ferrers, and the eldest son of Thomas and Margaret Ferrers.

Oil painting on panel, Edward Ferrers (1765-1795) by Rebecca Dulcibella Orpen, later Mrs Edward Dering (1830-1923), after British (English) School (c.1785/90), inscribed: Edward Ferrers of Baddesley Clinton/ Died 1795 aged 30 R.I.P. A painted oval, half-length portrait of the sitter who is turned slightly towards the right and wears a red frock coat open to the waist, a white waistcoat and pleated cravat. He has blue eyes and wears a smooth, grey wig. He holds a large leather-bound book in his left hand. Edward Ferrers (1765-1795) was the eldest son of Edward Ferrers (1740-1794) and Hester Bird (d.1822); he married Helena Alexander (d.1840) in 1788, she was the daughter of George Alexander of Stirtloe.