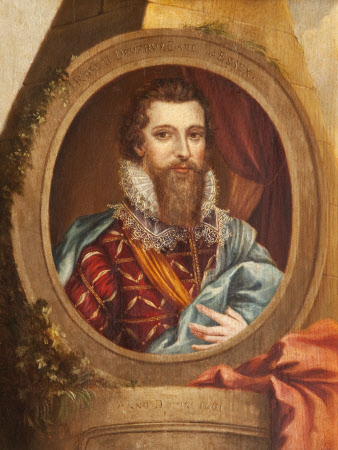 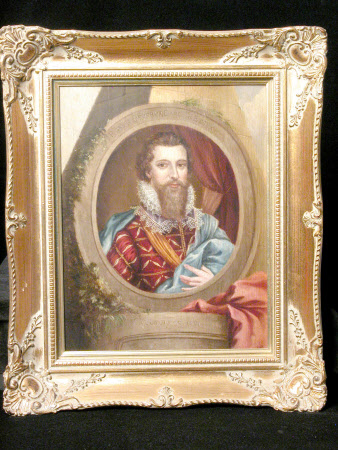 Oil painting on panel, Robert Devereux, 2nd Earl of Essex (1566-1601) in a Memorial Setting, attributed to Rebecca Dulcibella Orpen (1830-1923). Inscribed. Oval portrait, almost half-length, in ruff and slashed red doublet, clasping his light blue cloak to his body with his left hand, is seen in a simulated stone frame supported on a circular plinth, in front of a pyramid; ivy and other vegetation sprouts from it. The sitter has brown hair and beard and looks towards the left. He is set against a beige background with a red curtain on the right. The portrait is based on J. Houbraken's engraving of the miniature by Isaac Oliver then belonging to Sir Robert Worsley, 3rd Bt., but now in the National Portrait Gallery, in an ornamental surround by Hubert-François Gravelot, originally published by the Knapton brothers in 1738, and subsequently in Dr. Birch's Heads of Illustrious Persons in 1756.