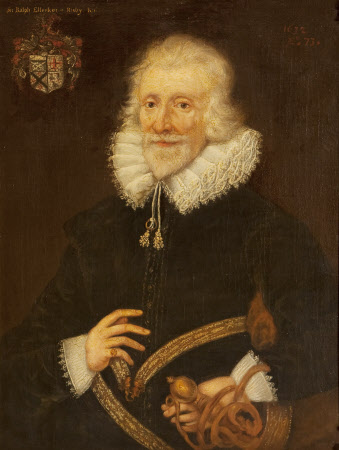 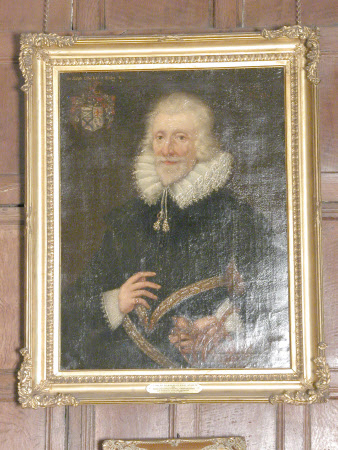 Rebecca Orpen was a talented amateur artist who married Marmion Edward Ferrers (1813-84) of Baddesley Clinton. She was prolific, working in both oil and watercolour, and much of her work remains in the house today. She and her husband lived at Baddesley with her aunt, Lady Chatterton and her husband, Edward Heneage Dering. They became known as ‘The Quartet’, revelling in art, history and their religion. On the death of their spouses, Rebecca and Edward Dering were married. Rebecca Orpen painted this to look like a late 15th century portrait. The sitter was an ancestor of the maternal grandmother of her husband. His coat of arms has been painted in the top left-hand corner.

Oil painting on panel, Sir Ralph Ellerker of Risby (b.1558/59), at the age of 73 by Rebecca Dulcibella Orpen, later Mrs Edward Dering (1830-1923), after British (English) School of 1632, circa 1885. Inscribed top left with name of sitter above coat of arms: Sir Ralph Ellerker of Risby Knt:;and top right: 1632/Æt.73.The frame label reads: SIR RALPH ELLERKER OF RISBY (AT AGE 73)/1632/ANCESTOR OF MATERNAL GRANDMOTHER/OF MARMION EDWARD FERRERS/R.D. Dering. C.1885. A half-length portrait of an elderly gentleman with white hair and beard, turned slightly towards the left and looking out at the spectator. He wears a black doublet with gold brocade trimming and lace cuffs and a white ruff tied with a tasselled cord. His right arm is raised to his waist and he wears a ring on the little finger of his right hand. He clasps the hilt of a sword with his left hand. A coat of arms is painted at top left, above which is an inscription. Sir Ralph was knighted by King James at his Entrance into York on April 17th, 1603. The mother of Marmion Ferrers, Rebecca Orpen's first husband, was Lady Harriet Townshend who was co-heir to the estate of her uncle, Roger Mainwaring Ellerker. The 2nd Marquess Townshend was the father of Lady Harriet who married Edward Ferrers in 1813. Her mother was Charlotte Ellerker of Risby Park, Yorkshire.