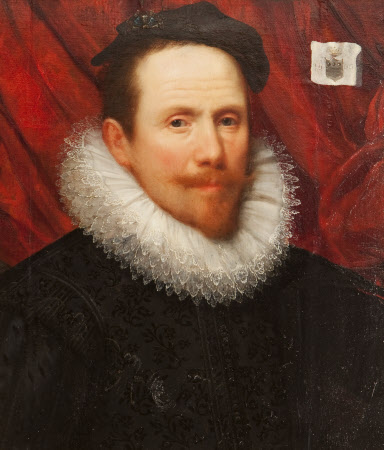 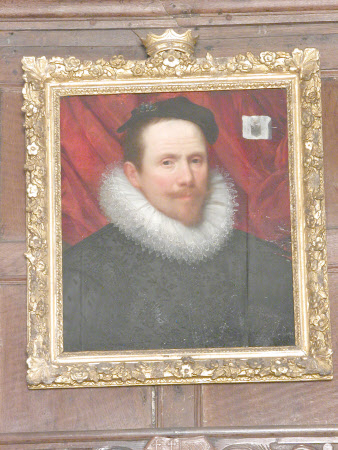 This picture looks like a 19th century work, because it has been extensively repainted, but it probably dates from the 16th century. The sitter’s features are similar to those of Robert Devereux, 2nd Earl of Essex, and the coat of arms support this identification. However, he may have originally been intended as someone else, as the long beard and hat were added at a later date.

Oil painting on panel, Portrait of an Unknown Man, miscalled Robert Devereux, 2nd Earl of Essex & 5th Baron Ferrers (1566-1601), British (English) School, circa 1615/20. A head-and-shoulders portrait of the sitter turned slightly towards the right and looking out at the spectator. He wears a black doublet and white ruff and a small black cap to which is pinned a gold brooch with blue stones. A cartellino bearing a crest is 'pinned' at top right to red silk drapery hanging behind the sitter. An inscription on the back of this painting written by Rebecca Dulcibella Ferrers (1830-1923) identifies this portrait as a likeness of Robert Devereux, 2nd Earl of Essex (1566-1601), the son of Walter Devereux. In 1981, the paintings at Baddesley Clinton were inspected by Sotheby's who expressed doubt that this was a portrait of Robert Devereux. Subsequent cleaning in 1981 showed that the hat and beard had been overpainted, probably by Rebecca Ferrers. The sitter was thereafter identified as Walter Devereux.