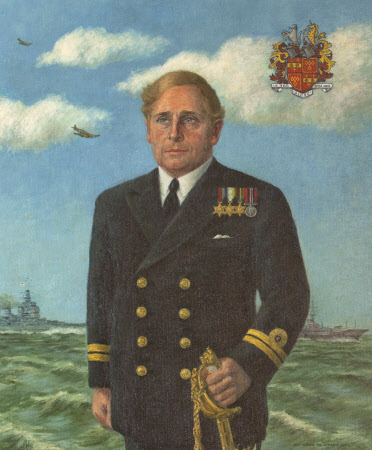 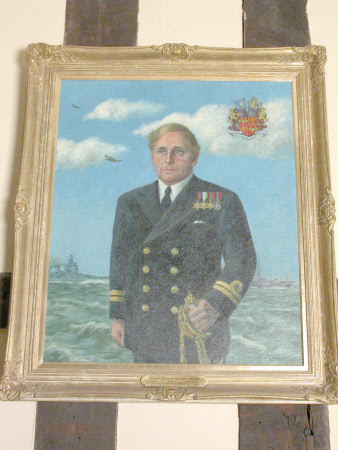 The sitter was the son of Thomas Walker (later Thomas Ferrers, d.1970), who bought Baddesley Clinton in 1940 from Cecil Ralph Ferrers (1887-1957). His parents initiated a comprehensive structural renovation of the house and bought appropriate furniture to replace that sold over the years. They were unable to pass the house to the National Trust as they could not provide a sufficient endowment, so their son, Thomas, embarked on a ten-year holding operation, during which time he opened the house for the first time. He successfully handed the house over to the National Trust in 1980. He is shown here in the uniform of a naval commander, having served in the RNVR from 1942 to 1946, in Combined Operations both in European and Far Eastern waters.

Oil painting on canvas, Lt. Thomas Weaving Ferrers-Walker, R.N., (1925-2006) standing before H.M. ships at sea, by Kathleen Townsend (fl. 1972), 1972. A three-quarter-length portrait of the sitter who stands facing the spectator looking up towards the right. He wears naval uniform and holds the hilt of a sword in his left hand. He is set against a background of battleships and aircraft carrier of World War II sailing on a choppy sea. Two planes or jets cross a blue sky at top left and family coat of arms is painted at top right. The son of Thomas Ferrers. He served in the RNVR from 1942 to 1946, in Combined Operations both in European and Far Eastern waters. He was the last private owner of Baddesley Clinton, ensuring the house was successfully handed over to the National Trust in 1980. He is buried in the churchyard of St Michael's, Baddesley Clinton.