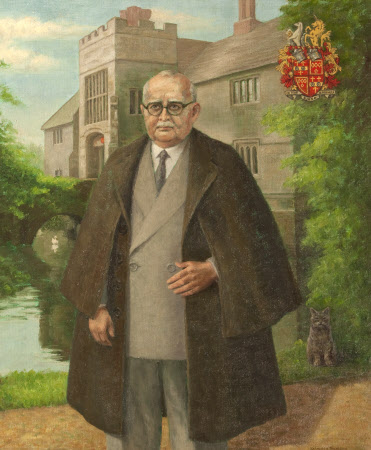 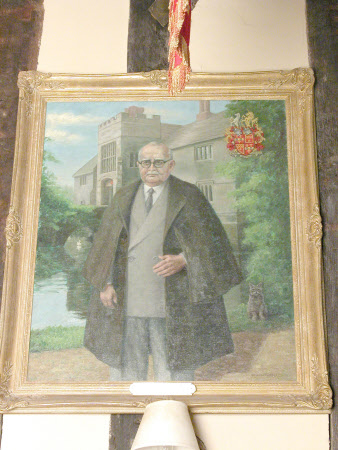 Oil painting on canvas, Thomas Ferrers, formerly Walker (1887-1970), standing in front of Baddesley Clinton, by Kathleen Townsend, (fl. 1972), 1972. A three-quarter-length portrait of Thomas Ferrers in late middle age and presumably post-humous. He wears heavy-rimmed spectacles, has white hair and a moustache and wears an unbuttoned tweed coat over a light grey two-piece suit. He stands facing the spectator, his right arm hanging by his side and his left arm raised to his waist. Behind him is the moat and the north corner of Baddesley Clinton. A swan can be seen swimming under the archway of the bridge. Thomas Ferrers' pet, a grey cat known simply as 'Grey Cat' (1931-1952) sits on the grass next to a hedge behind him to the right. The family coat of arms is painted in the top right corner. Thomas Walker purchased the estate in 1940, changed his name to Ferrers and set about restoring the house. His banner hangs above the portrait. Father of the Thomas Ferrers-Walker who arranged the transfer of Baddesley Clinton to the National Trust in 1980,