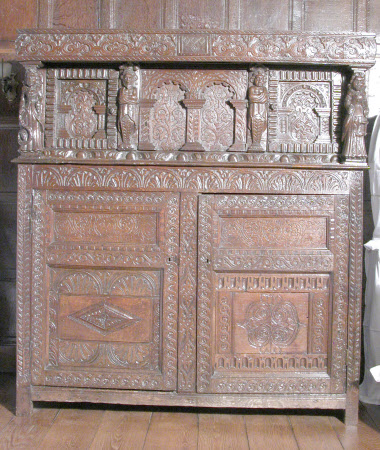 A carved oak press cupboard, English, circa 1640 and with alterations. The upper section with a scroll-carved frieze centred with a small tablet later carved with four lozenges (based on the Ferrers coat of arms), above a central arcaded panel, now a door, flanked by further doors framed with ribbed decoration, all three doors carved with stylised foliate detail and flanked by male term figures and outer allegorical figures, the lower section with lunette frieze and enclosed by a pair of large profusely-carved twin-panel doors, standing on stile feet with stiff-leaf carved detail. *The unusual large carved allegorical figures may represent Hope (holding an anchor) and Prudence (holding a snake). The lozenges carved on the tablet to the upper frieze, based upon the Ferrers coat of arms, are believed to have been added as recently as the 1940s.