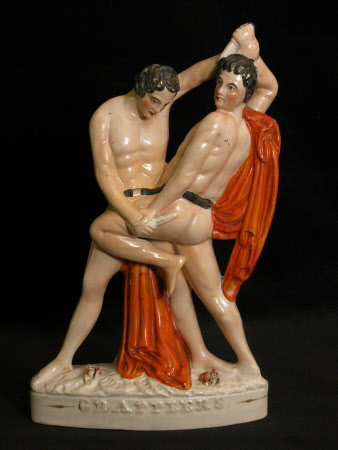 Ceramic, Staffordshire, Grapplers, Staffordshire Pottery. Full-length Staffordshire figure of two naked men bound together by a belt round their waists, each armed with a short knife in his right hand. An unusual and bizarre sport caught the attention of the public resulting in a clay version known as The Grapplers. The figure is based on a sculpture in bronze zinc by J.P. Molin which appeared at the International Exhibition of 1862 and attracted great interest. The potter probably took the design from an engraving which appeared in The Illustrated London News of 1st November 1862. The sculpture depicts an ancient form of Scandinavian duelling known as Baeltespaennare. The naked fighters were bound with a belt round the waist. They fought to the death with short-bladed knives. The sculpture stands in front of the National Museum in Stockholm.

Part of collection built up by Thomas Balston (d.1967). He wrote about the collection in Staffordshire Portrait Figures of the Victorian Age, 1958.