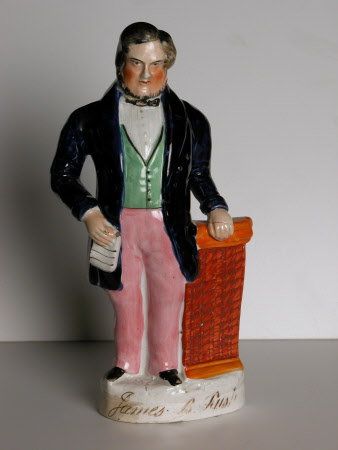 Ceramic, Staffordshire, James Blomfield Rush (1800-1849), Staffordshire Pottery. A full-leength Staffordshire figure of the murderer James Blomfield Rush. Standing, bare-headed. A speech in his right hand.On the evening of 28 November 1848 James Blomfield Rush shot Isaac Jermy dead on the porch of Stanfield Hall, he then entered the house and shot dead Jermy's son, Isaac Jermy Jermy, and subsequently wounded the son's wife, Sophia Jane, and Eliza Chastney, the chambermaid. Father and son were buried in Wymondham churchyard on 5 December. At the trial he defended himself. Rush was convicted and hanged before Norwich Castle on 14 April 1849 in one of the last public executions outside London. Special excursion trains were laid on for people to attend.