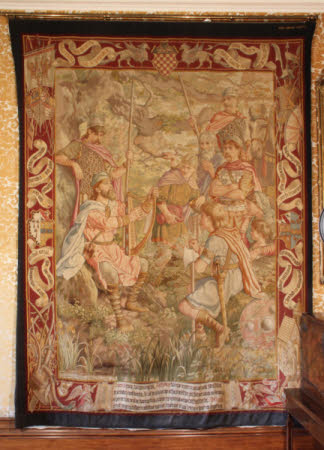 Tapestry, wool and silk, 6 warps per cm, King Alfred the Minstrel from a set of two of the History of King Alfred, Windsor Tapestry Manufactory after a design by Herbert Bone, 1888. The tapestry shows King Alfred in the Danish camp, playing the harp for the King of Denmark and assembled Danes. Alfred sits on the left with his harp on his knee, gazing upwards as he plays and with him mouth slightly open in song. The Danish king stands to the right watching, with his arms folded, a woman and a child to his right and a boy and an old man to his left, all watching intently. A warrior wearing chain mail and a winged helmet stands behind Alfred on the left, another warrior in similar dress approaches on horseback at the top right, and in the right foreground there a youth holding an axe sits with his embossed shield beside him. Strawberry plants and bracken grow around the men’s feet. The scene is a wooded grove with the branches of an oak tree as a backdrop, and a stream running by in the foreground with yellow irises growing to the left and brambles to the right. The tapestry has elaborate borders with pictorial devices and scrolls on a dull red ground. There is Viking ship in the top left corner, a trophy of arms at the top right, a collection of farming implements and a bundle of corn at the bottom left and a chapel, a female saint, a harp and an illuminated book at the lower right. In the centre of each side border there are coats of arms with scrolls bearing inscriptions from Shakespeare and the Bible above and below them. In the upper border there is another coat of arms flanked by two griffins and two more scrolls with inscriptions, and in the lower border two small angels carry a larger scroll with a long Latin inscription. At the left hand side of the lower border there is a small white shield bearing a crown and the letter W, and at the right hand side a scroll with the date 1888 and the name Herbert Bone. A wide dark blue galloon runs around the outside of the borders with the signature of the Windsor Manufactory at the top right.

Commissioned by Anthony Gibbs (1841-1907) for Tyntesfield and woven in 1888; thence by descent to Richard Gibbs, 2nd Baron Wraxall (1928-2001); Purchased by the National Trust from the estate of Lord Wraxall with the assistance of the NHMF and donations from members and supporters.

At right hand end of upper galloon: ROYAL WINDSOR TAPESTRY On scrolls in upper border: I will open / my mouth / in a parable, / I will shew my / dark speech / upon the harp [Psalm 78] On scroll at top of left hand border: Back’d with god / and with the / seas which He hath given / for fence impregnable. [Henry VI Part 3, Act 4, Scene 1] On scroll at bottom of left border: While the Earth remaineth / Seed time and Harv / est shall not fail [Genesis 8.22] On scroll at top of right hand border: Come the iii quarters / of the world in armes / and we shall shock them [King John, Act 5, Scene 7] On scroll at bottom of right hand border: Them hath He filled with wis- / dom of the Heart to work / all manner of work [Exodus 35:35] On large scroll in lower border: Danoru[m] enim, sub specie mimi, Aelfredus subiens tentoria unius tantu[m] fidelissimi / fruebatur conscientia: Ibi, ut joculatoriae artis professor, ni[hi]l fuit arcanum quod non ex- / ciperet tum oculis tum auribus; cumque ex omnibus animo satisfecisset suo, Adelingia[m] / rediit, congregatisque comitibus exponit inimicorum otium leveque vincendi negotium. [William of Malmsbury, Chronicle of the Kings of England, Book 5] On small shield at left of lower border: A gold crown over the letter W On small scroll at right of lower border: 1888 / Herbert Bone / Invenit On open book at right of lower border: Evan / gelium / Deus / Christi