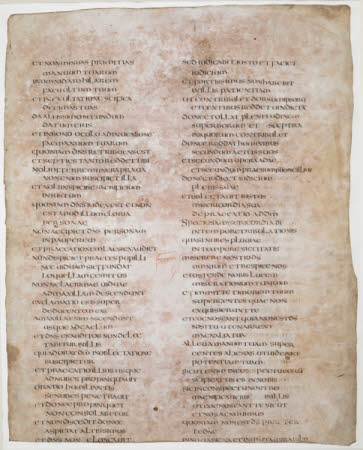 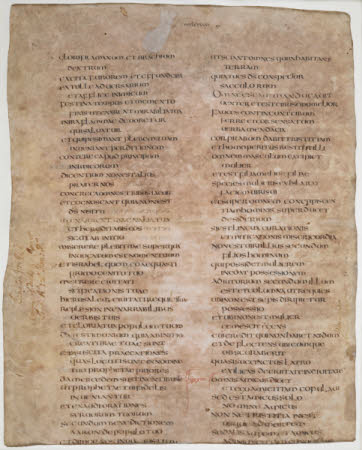 This surviving fragment of text is an important document for the history of Anglo-Saxon Christianity. It was created in the 8th century at a monastery known as Wearmouth–Jarrow on the coast near Newcastle upon Tyne. This religious house, like those at Glastonbury, Malmesbury and Lindisfarne, was a centre for Christian learning and important in ensuring that Christianity took root in Britain. We know from one of the greatest scholars of the period, the Venerable Bede (673/4–735), who lived at Wearmouth–Jarrow, that the library contained books brought from Rome for reading and copying. The monastery produced three enormous Bibles. Only one copy survives intact. The other two were broken up, probably in the 16th century. The surviving pages include those from the Book of Kings III–IV, now in the British Library. The page here (an extract from Ecclesiasticus) was found at Kingston Lacy, Dorset, in a set of estate papers from the 1580s.

The monastery at Wearmouth-Jarrow was not only a centre for scholarship but also for the production of handwritten texts. The new books produced by the monastic scribes included three enormous bibles (or pandects) of the ‘new translation’ commissioned by the monastery’s Abbot, Ceolfrith (d.716).; one for Jarrow, one for Wearmouth and one for Pope Gregory II, to demonstrate the impact of the Christian mission to England. Only the latter copy – known as the Codex Amiatinus – survives intact. It is the oldest complete Latin Bible and is held at the Biblioteca Medicea Laurenziana in Florence. The production of the Ceolfrith bibles was a huge investment in time, resources and skill. At least seven different scribes produced the text and more than 500 animal skins were needed for the 1,030 leaves of parchment in the Codex Amiatinus alone. The leaf from Kingston Lacy – sometimes referred to as the Bankes Fragment – was discovered at Kingston Lacy in 1984 wrapped around a group of Tudor documents relating to the 1585 sale of lands in Dorset belonging to Sir Francis Willoughby of Wollaton (1547–1596). It was common for manuscripts to be dismembered and reused and it is possible the bible was broken up around the time of this land sale.

[1] leaf.;. 420 x 335 mm. Provenance: From the monastery of Wearmouth or Jarrow, from where it may have passed to Durham Cathedral (de Hamel). Probably from the collection of Sir Francis Willoughby of Wollaton, great-grandfather of the 1st Lord Middleton, where it was broken up for use in bindings etc. Binding: unbound.

Bequeathed by (Henry John) Ralph Bankes (1902 – 1981) to the National Trust, together with the estates of Corfe Castle and Kingston Lacy and their entire contents in 1981.