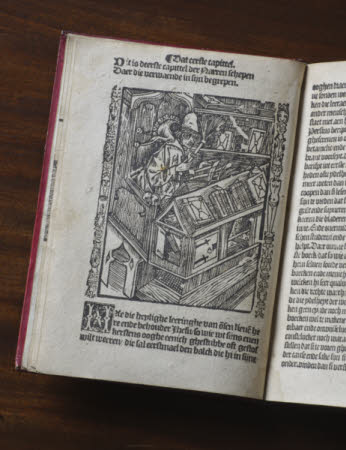 This is the Dutch edition of 'Das Narrenschiff' (The Ship of Fools), the satirical poem first published in Basel, Switzerland by the humanist and theologian Sebastian Brant (1458–1521). Described as the ‘first international best-seller in the history of German literature’, it describes a ship laden with fools setting sail for the ‘fool’s paradise’ of Narragonia. Among the catalogue of fools illustrated in the book is a bespectacled book collector, feather duster in hand, leafing through his books. Far from a man of letters, he is but an ignorant fool for whom books are objects of desire rather than objects of study. The verse above him reads: 'In dunce's dance I take the lead,/ Books useless, numerous my creed,/ Which I can't understand or read.'