State Bed probably made for George I 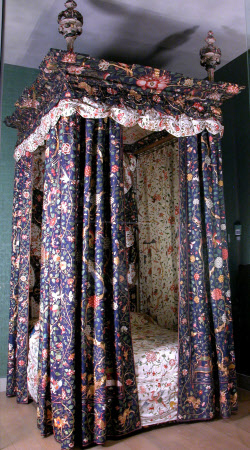 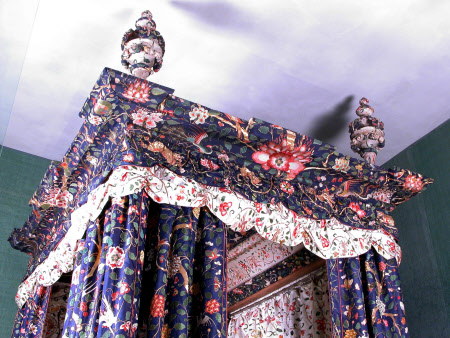 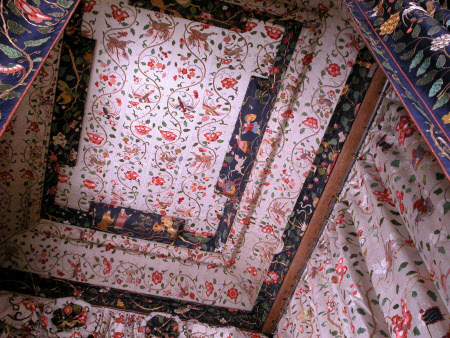 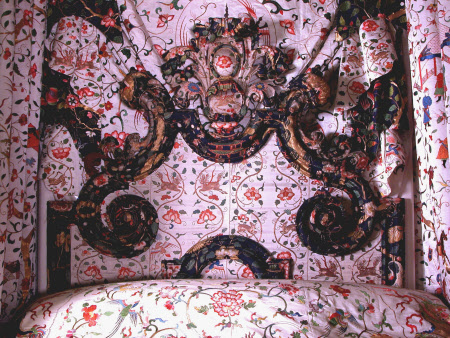 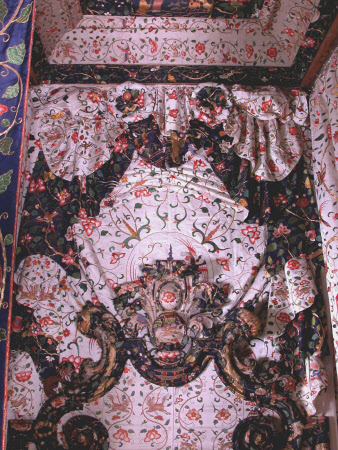 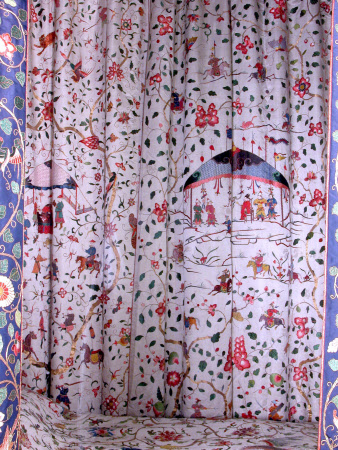 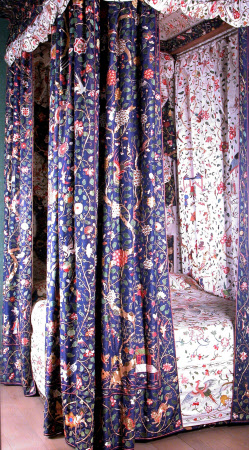 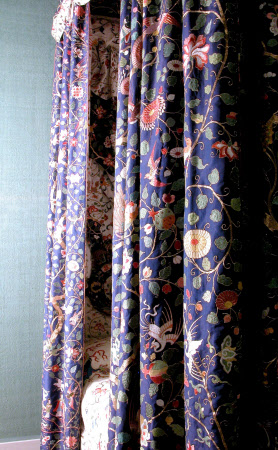 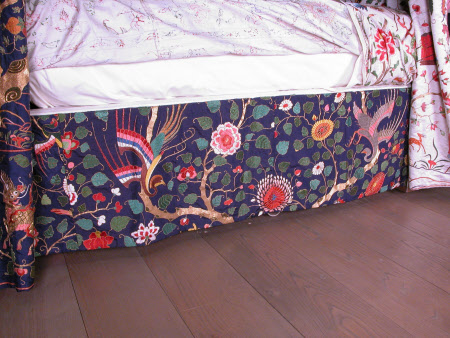 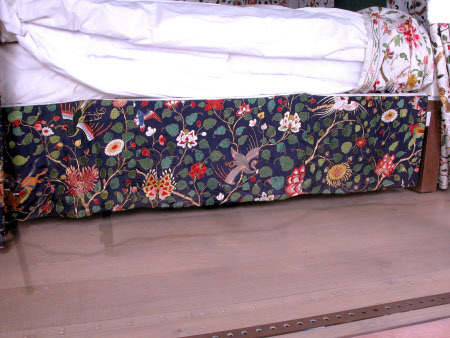 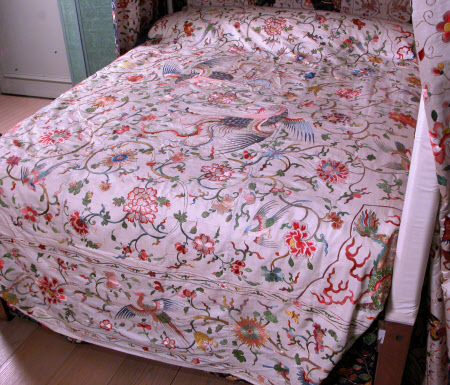 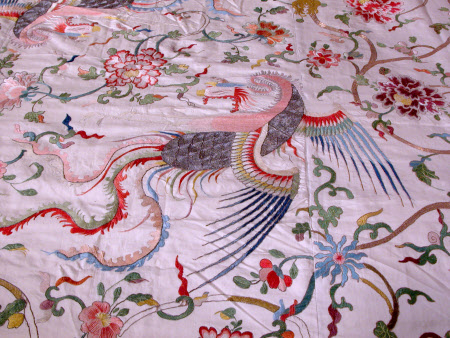 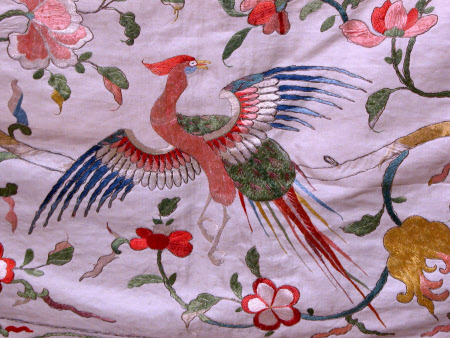 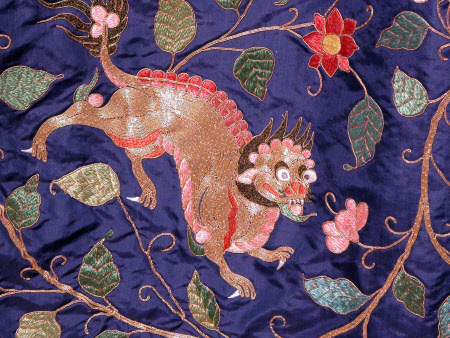 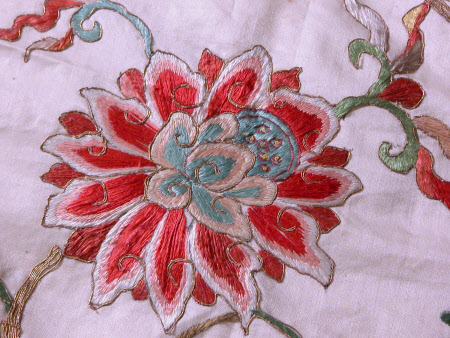 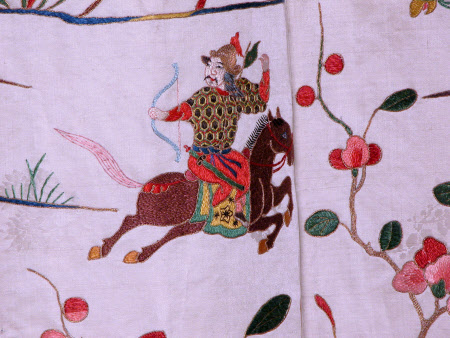 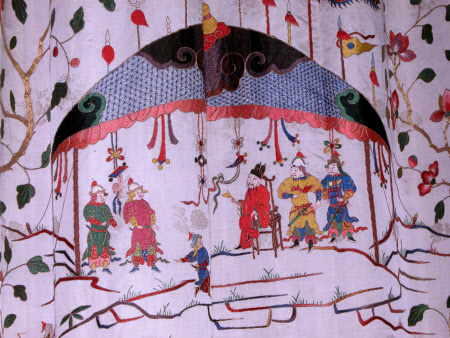 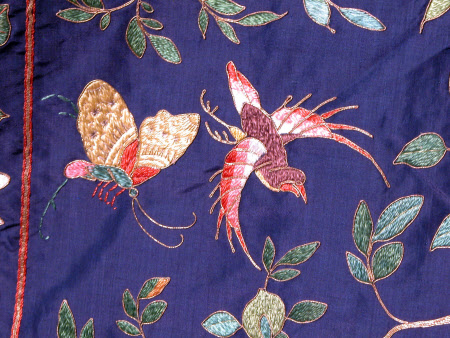 A rare and remarkable survival, this extravagant state bed, with its embroidered Chinese silk hangings, is in near-perfect condition and may never have been used. The striking blue outer curtains, embroidered with birds, dragons, butterflies and trees of silk, gold thread and peacock feathers, contrast with the interior of pale-ivory silk, adorned with a dream-inducing design of human figures, flowering foliage, animals and birds. The desire for high-quality Chinese silk increased during the late 17th century, with workshops manufacturing specifically for the European luxury market. The bed is thought to have been given as a wedding gift to Lady Caroline Manners (d.1769), on her marriage to Sir Henry Harpur (1708–48) in 1734. Lady Caroline had served as a maid of honour to Princess Anne, daughter of George II and Queen Caroline, and the bed may have been made for George I around 1715. It was possibly out of fashion by the time it was gifted to the family at Calke Abbey, and at the time the house and its contents were gifted to the National Trust in 1985, it had never been installed.

State bed, probably made for George I circa 1715. The bed is made from hangings and drapes of Chinese embroidered dark blue and white silk, the former lined with the latter. The silk and metal thread embroidery on the dark blue depicts processional figures, hunters on horseback and other male and female figures in brightly coloured robes, pagodas and other buildings, dragons, birds, gazelles and other animals. Trees with gold work trunks, scrolling flowers and foliage rise up the length of the 4 curtains. The knots of the tree trunks and the markings of the butterfly wings have been represented by tightly rolled peacock feathers. The central panels of the curtains are enclosed by borders of scrolling, flowering foliage with lions and dragons. The white silk linings are similarly embroidered with scrolling foliage and flowers, butterflies, human figures and various birds. The counterpane is white silk with an enclosed border of foliage and birds. The lower valance is of dark blue embroidered silk as is the ruched outer top valance. The lower top valance is similarly ruched and of white embroidered silk. The stepped cornice of the tester is of wood covered in dark blue embroidered silk in the same colours as above, but of a different scale of design. The backcloth is composed of elaborately swagged, pleated and draped white and dark blue embroidered silk with puffed rosettes. The inner tester is similarly composed of dark blue embroidered pelmets with the tester cloth composed of white embroidered silk. The headboard is elaborately carved with acanthus and a central cartouche, again covered in the same dark blue and white embroidered silk. The tester is surmounted at the front corners by carved plume-like finials, again covered in white and dark blue silk.

Chinese silks were highly prised in Europe for their quality and vibrancy of their designs. Chinese silk workshops had adapted their production to suit the tastes and requirements of overseas European markets since the sixteenth century. As the taste for Asian goods increased throughout the 17th century, Chinese and Indian textiles became a popular way to express sophistication and taste. Lack of familiarity with the textiles and their iconography meant that European consumers used the terms ‘Indian’ or Chinese’ interchangeably for anything of eastern appearance. The depiction of flowering trees was a well-established motif in Chinese art, evoking gardens and the harmonies of nature. The hunting scenes may refer to the annual imperial hunts which had been instigated by the Kangxi emperor in the 1680s. In England the trade in finished Chinese silk was relatively modest (the bulk of imports being raw silk) and was intended for the luxury market. Finished silk imports were beautifully embroidered or painted with patterns of flowers, birds, butterflies and dragons and used for high status women’s gowns and bed hangings and coverlets. The embroidered silk textiles on the Calke Bed are an incredibly rare and dazzling example of the type of embroidered silk produced for the European luxury market in China the early 18th century. It is believed that the bed was given as a wedding gift to Lady Caroline Manners (d.1769) on her marriage to Sir Henry Harpur (1708 – 1748) in 1734. Lady Caroline had been a maid of honour at the wedding of Princess Anne, daughter of George II and Queen Caroline, to the Prince of Orange in March 1734. Despite its opulent appearance and royal provenance, its design inspired by the engravings of French architect and designer Daniel Marot c. 1700, the bed would have been considered an old-fashioned gift by the 1730s. It is likely that it was never used. Evidence is provided in Stephen Glover and Thomas Noble’s History of the County of Derby (1829), ‘In this house, although it has never yet been put up, either for use or ornament, is perhaps one of the most splendid state beds in the kingdom’.

Thought to have been given as a wedding gift to Lady Caroline Manners on her marriage to Sir Henry Harpur in 1734. Lady Caroline had been a maid of honour at the wedding of Princess Anne, daughter of George II and Queen Caroline, to the Prince of Orange earlier the same year. Transferred to the National Trust by the Treasury in lieu of Capital Transfer Tax (CTT) in 1985 with an endowment provided by the National Heritage Memorial Fund (NHMF).