Nonnenwerth Drachenfels (near Bonn, Westphalia, on the northern Rhine) 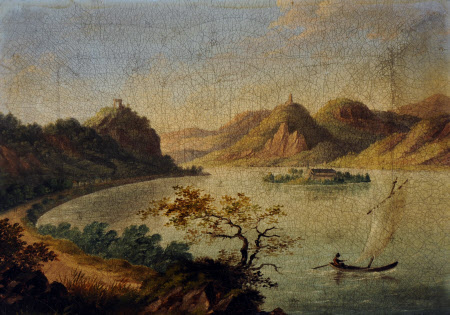 Oil painting on canvas, Nonnenwerth Drachenfels (near Bonn, Westphalia, on the northern Rhine) by Sackville Smyth (fl.1837), 1837. A lake surrounded by mountains an island (Nonnewerth) with a building in the middle distance. A man in a boat in the foreground. Inscribed on the reverse of the stretcher. Painted by Mr Sackville Smyth at C (B?) onn and presented by him to Sir George Crewe on (as) his first (?) in oil painting - Dec. 11 1837 J.C.' The canvas is inscribed on the reverse 'Nonnenwerth Drachenfels SS 1837'. This was a popular route for artists travelling across Europe in the early 19th century; Turner also sketched views down the Rhine with Rolandseck, Nonnenwerth, Drachenfels and the Seven Hills two years previously.