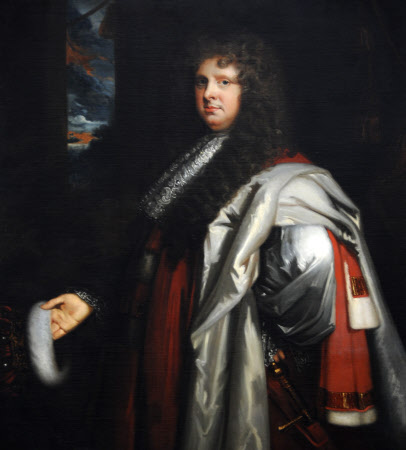 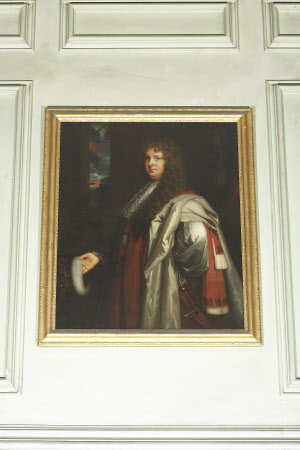 Oil painting on canvas, Thomas Crewe, 2nd Baron Crewe (1623-1697), attributed to Charles d'Agar (Paris 1669 – London 1723). A three-quarter length portrait of a portly gentleman shown side view with his arm akimbo, his face turned towards us. He is dressed in robes of red and white cloth and holds a coronet in his right hand. He wears a long brown wig. A narrow piece of red and grey sky is shown in an opening in the dark background. Lord crewe (1623-1697) was very wealthy, but since he had no sons, his four daughters were considerable heiresses; Catherine Harpur (CAL/P/309, CAL/P/315 and CAL/P/322); Airmine, Mrs Cartwright; Jemima, Duchess of Kent (CAL/P/319); Elizabeth, Countess of Arran (CAL/P/321). An entry in the Calke account books refers to a payment to 'Mr Dygar' for Lord Crewe's picture in May 1707; as Catherine was a younger daughter, she may not have inherited the original portrait and thus had to have a replica made.